Seth is an accomplished shooter with an extensive competition and instructing background, an Afghanistan combat veteran, and the lead instructor for the Montana Shooting Institute. Seth is an avid student of the gun and the combat mindset. As an instructor he is dedicated to increasing the knowledge, skill, and survivability for shooters in all walks of life. Seth spent several years in the prestigious Army Marksmanship Unit as an international and service pistol team member, and a primary instructor for their Instructor Training Group. He has trained combat forces from a dozen countries, various US Army units, Special Operations Forces, SWAT, and US Marshall Service personnel. Seth's shooting accomplishments include being a member of the Olympic Development Team, several NRA Collegiate Pistol National titles, 25m rapid fire pistol finalist at the 2012 Olympic team trials, and US Army sniper school honor graduate. Seth is currently is a sworn police officer and a state legislator. He is also an avid outdoorsman and is usually roaming the mountains when not training. 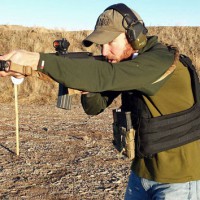 In today’s world of mass shootings and terrorist attacks, an increasing number of people are looking to be prepared for such an event. Weapons and training should play a central role in that preparation, but so should gear. As threats have evolved so has the approach to being prepared – enter the plate carrier. Plates […]