If you’ve been following Monderno very long, chances are you’ve seen my two custom Smith & Wesson M&Ps: one from V&C Industries, and the other Business End Customs. Both fantastic guns, and on both, I have 10-8 Performance sights installed.

The brass bead front sight is a good sight, and overall I’m pretty pleased with it. It’s not quite as visible as I would like, especially when it’s either extremely bright (direct sunlight) or when it’s rather cloudy, but other than that I like it. It’s easy to pick up in most conditions and is fairly precise.

The rear sights are simultaneously awesome and frustrating. Let’s start with the good qualities. 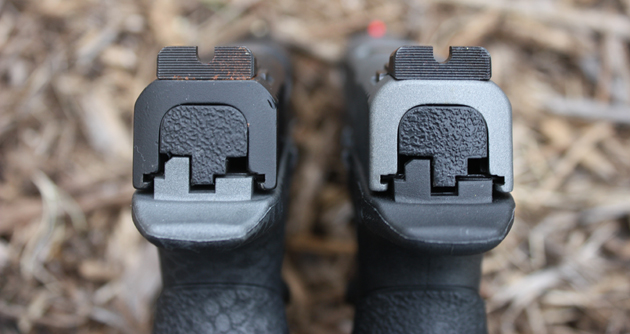 The rear sight is a U notch CNC machined from heat treated 4140 bar stock and is very tough. I’m sure with enough abuse I could break it, but so far with normal manipulations, like racking the slide on my holster, belt, boot, etc, it hasn’t broken off. TheÂ rear face is serrated at 40 lpi to reduce glare in varied lighting conditions which seems to work well, and I love the profile of the sight. It’s a rounded square profile, which also makes it snag free for concealed carry.

That’s the good. If you looked at the image above though, you already know what the frustrating part is.

These sights rust like nobody’s business – in the photo above, the rust you see on the gun on the left is after the rust has been cleaned off once. The pistol on the right I’ve only had for a month or so, and rust is already starting to form. In my opinion, this is simply unacceptable.

When the rust first started to form, I contacted 10-8 Performance to see what the deal was. Here is the response I received from someone named Donna:

The sights are carbon steel and only finished in black oxide. Â Unlike the finish on the Glock slides which are nearly impervious to rust, these require a little bit of oil on them after installation. Â They currently come packaged dry, as we have also had complaints in the past that they were too oily and unattractive (I know, we can’t win). Â Try cleaning them off and coating with Shooter’s Choice Rust Prevent or Froglube paste.

Update 9/19/2012: Hilton from 10-8 Performance left a more detailed response in the comments below.

I know some of you are probably thinking “so what?”, and to a certain extent I agree. Put some lube on the sights and no worries, right? There are two problems with that thinking as I see it though. The first and most obvious is that I don’t want to have to keep oil on the sights in order to keep them from rusting on a gun that I’m going to carry inside the waistband (IWB). Your mileage may vary.

Second, I don’t want to have to “fix” sights that I paid $80-90 (front/rear pair) for. Why can’t they come with a more corrosionÂ resistantÂ finish out of the box?

To be fair, not everyone has had the same rust problems that I have had. It very likely has something to do with living in Houston and the horrendous humidity. But out of all my guns and all of the aftermarket sights I have, these are the only ones with rust on them.

This is a tough one for me to wrap up. I really like these sights, but the rust issue is super annoying. I know I can work around it, but the fact that I have to is frustrating. What do you think? Valid complaint, or stop whining?