It seems like forever ago that I did my first Hardcore Hardware tool review; running their LFT01 Tomahawk through its paces and finding that HHA knows how to make a tomahawk.Â  Since then Iâ€™ve abused a few of their fixed blade knives and continue to be impressed by their durability and quality.Â  Well, HHA sent me another tomahawk, this time their BFT01-G model (I still wish these things had names) and I had high hopes that it would live up to the performance of my past HHA reviews. 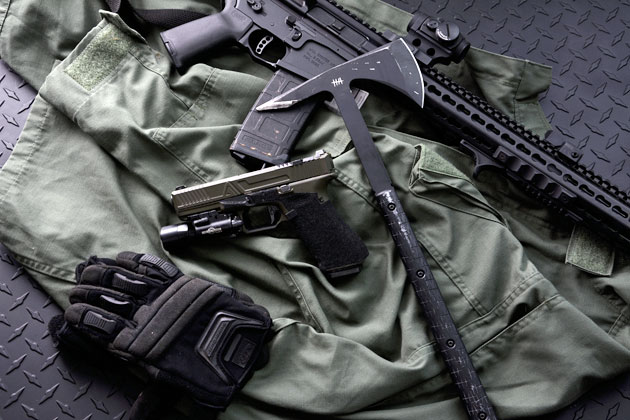 The need for a tomahawk isnâ€™t found with everyone; even if you are in an occupation where guns are your tools, a tomahawk may not be needed in your kit or allowed by your supervisors.Â  If you do find a need for a hawk, you learn quickly that the discount models found on Ebay or Amazon are not going to hold up in the long run.Â  Iâ€™m hard on my tools, because there is usually hard work to be done and a tool made of inferior metal isnâ€™t going to be capable of the tasks I will need it for.Â  Hardcore Hardware uses D2 steel almost exclusively in their products, D2 is sometimes a controversial steel for use in cutting tools; though Iâ€™ve yet to personally see why when it comes to large fixed blades or tomahawks.Â  D2 is hard steel known for its abrasion resistance and ability to hold an edge; commonly used for shear blades and industrial cutting tools, D2 is able to maintain a good degree of performance for a longer period of time compared to other steels, though this is largely dependent upon the task. 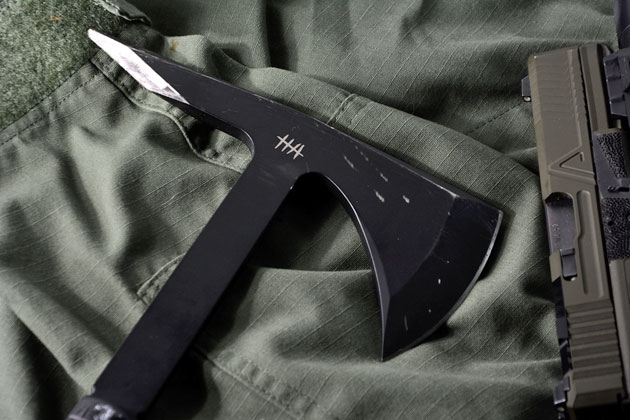 HHA doesnâ€™t make knives and tools for fine cutting applications specifically.Â  Many of their knives are very well suited to more precise cutting, but their intent is a hard use tool for multiple tasks and D2 makes that very possible.Â  HHAâ€™s target audience is men and women who need to cut things that are designed to not be cut and break things designed to not be broken; from dry wall to brick, hinges to cable, the tool needs to make short work of the task. The BFT01-G, like many of HHAâ€™s products has a Teflon finish (for this tool, had in black or tan) that holds up to all but the hardest abuse and since its made of D2, corrosion resistance is strong. 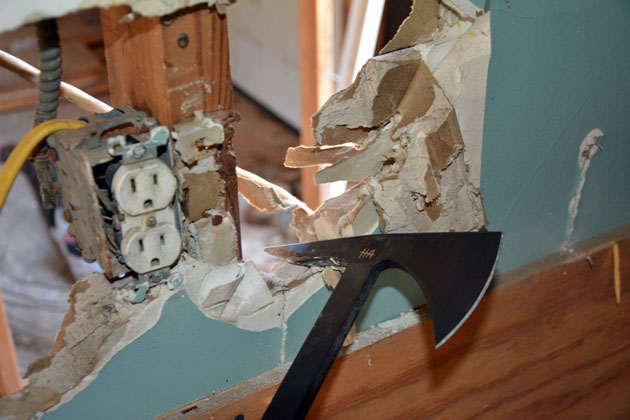 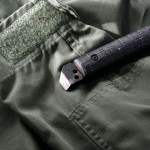 The BFT01-G is large by some tomahawk standards; almost 19 inches in length with G10 grips that more than accommodate a two handed grip.Â  The body is 8mm in thickness, only narrowing at the forward beard, rear penetrator spike and bottom chisel tip.Â  The beardâ€™s cutting edge is wide, nearly enough to provide total hand protection with a high choke grip; it has a shallow narrowing that gives a multi-use cutting edge while maintaining enough forward thickness to keep the edge strong.

The rear spike is purpose built to punch holes and chisel hard material.Â  To finish off the business ends, the pommel is a chisel tip that gives you the total length of the tomahawk as leverage for prying.Â  So on its face, the BFT01-G looks ready to tackle some serious hard use, but how well does it perform?

My testing, as often as possible is realistic.Â  You can make any tool, knife, gun or other piece of gear fail by increasing the unrealistic demands in a test so my goal is always the extreme end of realism.Â  For the BFT01-G, I wanted to test it against a number of common building materials that the customer will encounter.Â  As a tool, the tomahawk usually goes from â€œI donâ€™t know if I need thatâ€ to â€œI donâ€™t know how I got along without it,â€ at least that was my experience when I first added a hawk to my kit almost a decade ago.

For on-body carry, the BFT01-G is a tall order.Â  Its length doesnâ€™t compliment belt carry well, and for those whose business attire is a plate carrier, this tomahawk is best relegated to the rear of the PC or high on the chest where it wonâ€™t interfere with other pouches.Â  It can easily be attached to the back of a team member for easy access, or worn as a sub load on a thigh platform, but those are the easiest options.Â  Including it in a breaching kit or on your emergency bag is the best bet because for most of us, it wonâ€™t be a daily use tool. For use, Iâ€™ve had the BFT01-G since June of 2014 and have run it as hard as I realistically could.Â  The 2 and a half pound overall weight working with the overall length gives this hawk a lot of deliverable force; drywall, plywood, pad locks, interior doors and even sheet metal are dealt with in short order; between the cutting edge and the rear penetration tip, biting into a surface and then cutting through it is efficiently handled.Â  The chisel tip pommel was one of the most useful features and where the D2 steel really showed its usefulness when confronting locked doors or when leveraging into brick or other material.Â  The D2 resilience to abuse is in keeping with what I expect from HHA.Â  Even under my total body weight concentrated on the center of the BFT01-G, I was not able to noticeably bend or warp the handle, with strikes against metal and brick, the cutting edge did not chip or crack and at the end of my testing the cutting edge is more than serviceable. I didnâ€™t use it every day, but on many occasions it served to punch drywall, brick and wood.Â  As a hand axe, the BFT01-G has enough handle leverage to make easy work of general cutting tasks and more than enough weight to break the hardened steel of pad locks and smaller chains.Â Â  For nearly a year I have had the BFT01-G with me, either in my vehicle or in my gear and used it every chance I got.Â  For a tool like this, a few weeks or months of use wouldnâ€™t be sufficient.Â  By using the BFT01-G in as many environments as it came needed, it excelled at everything except maneuverability in tight quarters.Â  Using the BFT01-G in a small room the size of an average half bath, there was not enough room to build a proper swing to hit a waist high padlock, though the BFT01-G has more than enough length to generate sufficient force to pry, and in this respect it can still be used in close quarters.Â  A shorter handle tomahawk may be preferred if you plan on using it mostly in compressed space.Â  In any event, the durability over the review period has been very impressive, HHA chose wisely with D2 steel as its very chip resistant and their Teflon coating stands up to all but the hardest abuses.

For more survival related tasks such as cutting wood or clearing brush, the BFT01-G functions well, though not as well as a tool dedicated for those tasks.Â  As a tomahawk design, the BFT01-G performs in all areas but isnâ€™t designed to excel in anything but brute force cutting and extraction where the cleanliness of the cut is not an issue.Â  For a prepper, this would be a quality edition to your gear and will definitely outperform and outlast many of the cheaper tomahawks peddled to preparation minded individuals.

My only real con is the price.Â  Retailing online from $434.00 to $479.00, this isnâ€™t a purchase for most causal needs.Â  If I didnâ€™t already have a good knowledge of HHAâ€™s other products, the price would be a large turnoff for me, however after seeing the performance of the BFT01-G firsthand, Iâ€™m confident that its worth whatâ€™s asked and will probably outlast similar tools had at half the price.Â  If you only want to buy once, the BFT01-G is an excellent purchase.