Earlier this year,Â INFORCE released a momentary only version of their weapon mounted light (WML), and I ordered a white light only version in black to mount on my AR. If you’re not familiar with the INFORCE WML, as the name suggests, it’s a light that attaches to your rail using INFORCE’s patent pending clamp system, giving you a lightweight, low profile, polymer weapon light. No wires or tape switches needed.

The white light, momentary only version features a very simple user interface (UI), on and off. Press the switch and you get 125 lumens, release and the light goes off. I much prefer this simple UI, especially given my needs for a weapon light.

Aside from the super tough polymer body and the 3 ounce weight (which is amazing), there are a couple other things I should point out. There are two ways to lock the light – that is, make it inoperable. The first is a nice little safety lever that folds over the activation button that I like. I keep this lever in the locked position until I need the light. When I want to use the light, it’s easy to fold the safety lever down with my thumb as I shoulder the weapon.

The second way to lock the WML is to unscrew the head of the light. This I’m not really a fan of, as I worry that it could become unscrewed accidentally, making the light inoperable when you need it most. So far though, this hasn’t been an issue.

The INFORCE WML is also waterproof up to 66 feet. 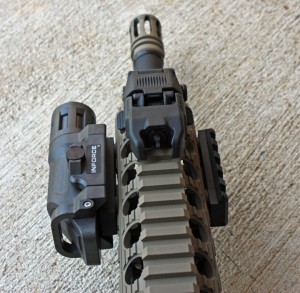 I wanted a weapon light that was easy to use that would primarily be used indoors. And since I (sadly) don’t have anyÂ night visionÂ equipment, I had no need for the IR capabilities. This is what led me to getting the momentary white light only version of the WML. For myÂ purposes, this light is perfect. For indoor applications, I think 125 lumens is more than enough output to both illuminate and temporarily blind your target.

So far I haven’t had any issues with the INFORCE WML. It’s super tough and extremely lightweight. Mounted on the front of my rifle, it doesn’t make the rifle front heavy at all, and there’s only just a little shadow created from the barrel. Not enough to matter to me. I also really like the angled activation switch, as it provides a comfortable and convenient location for my thumb in a forward grip.

Quality is awesome, this thing is quite the little beast. Mine has been thrown in the dirt, run on several different rifles, mounted and re-mounted at least a dozen times, and you can’t really even tell it’s been used. Value is another big win for the WML – at the time of writing, you could buy an INFORCE WML momentary only for around $100.

I really like my INFORCE WML. So much that I will probably get one for my other AR as well. If you’re looking for a weapon light that is tough, lightweight, low-profile and you don’t need more than 125 lumens, take a look at the INFORCE WML. I think you’ll like it.

Also worth mentioning is thatÂ INFORCE is coming out with a pistol light, and if it’s anything like the WML,Â I want one.