Company to company, nothing really changes much when it comes to tactical nylon. Whether the company makes chest rigs, duty belts, slings, hydration carriers or even plate carriers theyâ€™re virtually all the same. Any new company can basically acquire nylon, a sewing machine, a name and they will become one of a thousand or so companies that exist in the industry today.

With that being said, most of the aforementioned types of companies make overt, direct action type gear thatâ€™s not very concealable. There is however one company that just started last August that makes low visibility gear for personnel in high threat environments. The company was formed from much design, ingenuity, real world experience and a desire to make the best low-vis gear out there, and their name is Rogue Gunfighter.

Today we will take a look at the Rogue Gunfighter Low Vis Rig (LVR).

Rogue Gunfighter (RG) was formed back in 2012 by a group of friends who had worked in the some of the worldâ€™s most undesirable places. From Yemen to Libya, South America to Europe, Iraq to Afghanistan and even the Indian Ocean to Pakistan, they had been there, lived it and now had the knowledge to develop the best low-vis gear for others with similar needs. They all come from diverse backgrounds to include various branches of the US Military inclduing SOCOM, OGA, Intelligence, Anti Piracy/Ship Protection and High Threat Protection.

Their culture is derived from the â€œGunfighterâ€ lifestyle and warrior ethos, where men and women live a life that is geared to protect their families and country. It is a patriotic view on how one should live their life. RG is the combination of many years in government service and the ability to see a need and find a way to fill it. Quoted from the owner himself, â€œRG was created because as an operator we used to rubber band and rig up gear any way we could. I wanted to take those tricks we used and develop products that actually did the things we rigged.â€

Primarily all of their products are designed for low visibility operations, high threat protection, direct action raids or situations where you donâ€™t want to stand out like a sore thumb. On the contrary though, that doesn’t mean their products canâ€™t help others as well. Alyssa who is the VP Sales & Marketing over at RG is a mother of two and uses their headlamp very frequently. Also their LVR could be used as a bedside throw on carrier for a â€œworst case scenarioâ€ home invasion, their No-Vis Ankle Med Kit (NVAMK) can be used by virtually anyone who wants to have medical gear on them at all times and their soon to be released Low Vis Chest Rig (LVCR) can be used by hunters and hikers alike who would like a system to equally balance their load out. Whatever your lifestyle is, I can almost guarantee that one of RGâ€™s many products can benefit you in some way, shape or form.

After following RG on Facebook since their inception, I was more than thrilled to have the opportunity to meet them in person and see what all the buzz was about at this yearâ€™s SHOT Show. After SHOT Show RG stated that, â€œWe had a phenomenal show at SHOT this past year! It was the best case for us to launch our new products and introduce ourselves to the market as a whole. We also had unbelievable feedback. For instance, everyone who has put on the LVR has said it is the most comfortable carrier they have worn. Most don’t want to take it off.â€

After a little bit of time going back and forth with RG and James from High Threat Concealmentâ„¢ (review coming soon) I was able to get my hands on their Gen 1 LVR prototype and now their final production model LVR. Since their inception in August they have gone through at least four evolutions to get their production model LVR. The overall design is virtually the same from the Gen 1 to the current production model, the only real major changes were added pouches such as the admin pouch at the users 6 oâ€™clock, a configurable radio pouch, a more secure chest rig and more securable tabs on the cummerbund.

The LVR is completely adaptable and configurable for a multitude of contexts needed by the user. For instance, their supplied chest rig can clipped on with whatever the user needs for aftermarket magazine pouches, grenade/smoke pouches or even a pistol holster. You can also use the supplied shoulder pads for more relief if you have a heavy, more â€œaggressiveâ€ loadout. 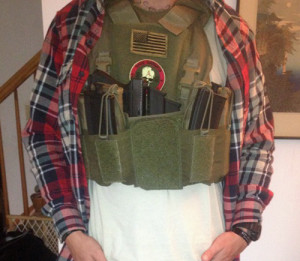 On the contrary, if you need a more low-vis signature, you can remove the chest rig and shoulder pads and rely on the many elasticized pouches located around the cummerbund, and even use the kangaroo pouch in the middle of the rig for your sidearm. In its low-vis form, you can throw a button up over the rig and be completely concealed. Finally, for an even deeper form of concealment, the LVR can be used strictly as a plate carrier underneath a suit if needed in the context of executive protection. In this configuration, you could carry your loadout on a Low Profile System designed by High Threat Concealmentâ„¢.

Basically the user has three different armor carriers all in one, sleek package.

Having a military background and a fascination with low-visibility type of work, you could say I have sort of a biased view on Rogue Gunfighter products. Additionally, I also have a job in the executive protection line of work so even though I may not use the LVR for its true, intended purposes, I still have a use for it in its extremely minimalist form. Knowing that I am supporting someone that I know is putting their life on the line everyday, as well as constantly evolving their products, makes buying RGâ€™s gear a no-brainer for me.

The LVR has gone beyond my original expectations from seeing it at SHOT show. Anyone can produce quality, tactical nylon but no one has put this much consideration into making it specifically for the context of low-visibility, high threat operations. I have yet to find a company that puts so much dedication, quality and honesty into products that are for the most part not meant to be seen. â€œNothing is better than designing a product for people who put themselves in harmâ€™s way to serve our country and keep us safe, to actually use and love. It is incredibly satisfying.â€

To summarize, if youâ€™re in the market for a multi-mission, adaptable and functional armor carrier, then look no further than Rogue Gunfighterâ€™s Low Vis Rig. Whether youâ€™re a PSD Contractor abroad, a Law Enforcement Officer here at home, an Executive Protection Agent securing your client or just a law abiding citizen that wants the ability to feel secure when you hear a bump in the night, take a look at the LVR.

Being secure and concealed is easier than you might think.

Today I am pleased to welcome my friend Ian Strimbeck as a new contributor here on Monderno! Ian is a veteran of the United States Marine Corps, a certified Combat Focus Shooting Instructor, NRA Basic Firearm and Massachusetts State Police Firearms Instructor, certified Glock Armorer and certified Fit Shot Instructor. He works executive protection services for Resolute Security Group and as an instructor at Down Range Firearms Training.