This year over Memorial Day weekend I participated in the DallasÂ Carry The Load event on team Task Force Fallen Warriors, a joint team with MADCAT Aviator | Operator. Over the course of the ~20 hour event I walked ~30 miles (I didn’t wear a pedometer) to honor the sacrifices made by many to preserve the freedoms that we as Americans enjoy everyday.

Though Carry The Load is 20 hours long, there’s no time or weight obligations. Some folks show up for the opening ceremonies, go home, and then come back the next day for the closing ceremonies, and that’s perfectly fine in my opinion. Our team, however, stayed all night.

Walking that many miles on concrete carrying a pack isn’t easy, but if you’re not using the right gear, it can be downright miserable. Here’s the gear I used for Carry The Load, bottom up, and how it worked out for me.

Since I knew I would be walking a bunch of miles carrying a pack, I decided to skip the running shoes and go with something that had more support, so I went with my Merrell Moab boots. I have countless miles in these boots on varied terrain, so I had a pretty good idea how they would perform. For socks, I mostly wore Smartwool hiking socks, which are awesome.

I would have liked a bit more heel cushion since we were walking on concrete, but overall I’m happy with my choice of footwear. In the blister prevention department, I fared very well all things considered. While I had a few hot spots form, I did not get a single blister.

My blister prevention plan was pretty simple: a good pair of boots coupled with Smartwool socks, and liberally applying Bodyglide to my feet every 4 hours or so. It worked like a charm, but I had moleskin in my med kit just in case. I should also mention that my feet were somewhat prepared for the onslaught of miles, as I run/hike fairly regularly.

For more in the blister prevention department, Bryan Black from ITS Tactical (who also had a team at Carry The Load) has a nice in-depth article on his approachÂ for Carry The Load and how it worked out for him.

Our team shirts were the awesome XGO PT shirtsÂ donated by XGO, which we then had printed with our team design. The shirts worked well – even though I sweat profusely, I was for the most part dry because of the wicking properties of the Acclimate Dry Polyester. Thank you to the folks at XGO for donating!

Going in I wasn’t too worried about my clothing choices, as they are all layers that I’ve used before on long hikes, and they worked great at Carry The Load as expected. 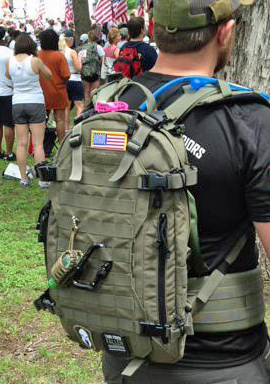 The short version is that the Skinny Sasquatch is aÂ multi-mission capable low-profile assault pack, and it was extremely comfortable over the course of Carry The Load. Between gear and water I was carrying 20-25 lbs, and I was very pleased with how the pack carried over the course of the event, both with and without the hip belt.

More important than the gear used however is the event itself. Thank you to everyone who donated to our team or bought a Task Force Fallen Warriors patch. Together we raised $3,765 for the Carry The Load charities.

Carry The Load is just an awesome event, and something that I look forward to doing again next year. Sure I was pretty exhausted by the end, and yes I was a little sore, but none of that seemed to matter much to me as I was standing at the closing ceremonies. Seeing thousands of people standing there celebrating the freedoms that have, and honoring the sacrifices that so many have made to give us those freedoms really left me with one thought.

I’m proud to be an American.