This is something you have to see to believe. 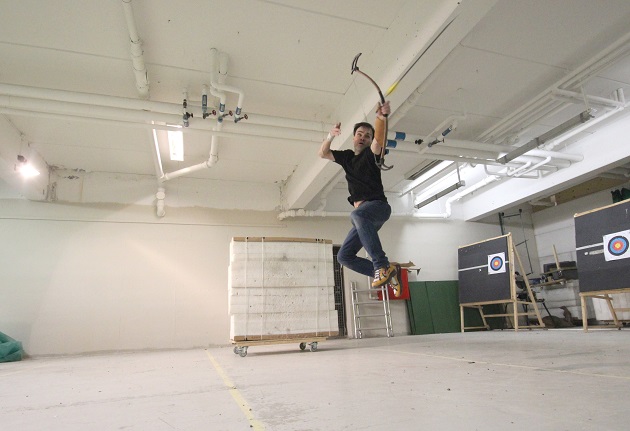 Jerry Miculek’s archery counterpart has been found…watch the insanity for yourself. Someone get this guy on Discovery Channel.

Press release from Lars below.

For thousands of years, the bow and arrow was used for war. Those days are long gone, and most people today only know of archery through TV and movies. However, as the Danish archer Lars Andersen has proved, Hollywood archery has very little to do with actual war archery. [VIDEO LINK: https://www.youtube.com/watch?v=BEG-ly9tQGk]

Learning to shoot in pretend play battles
Lars Andersen originally started using bow and arrow to fight in pretend battles during larps (live action role play) events, where he played a soldier in a medieval-inspired army. While larps can be about anything â€“ the Danish/Polish Harry Potter inspired larp College of Wizardry (cowlarp.com) recently got world wide media attention and there wasn’t a rubber sword in sight there â€“ many larps take place in fantasy worlds inspired by J.R.R. Tolkien’s The Lord of the Rings. And it was at one of these larps, that Lars started to learn to shoot fast while moving.

The fastest archer alive
In 2012, Las Andersen released his video “Reinventing the fastest forgotten archeryâ€, where he showed how he had learned to shoot from old archery manuscripts. Using these old, forgotten techniques, Lars demonstrated how he was now the fastest archer on the planet, and after its release, the video got 3 million hits on youtube in two days. This video hit its first million views within 13 hours, and has already spent a few hours as the #1 thing on reddit.

A new level of archery
Since the 2012 video was released, Lars has studied and practiced, and he is now able to fire three arrows in 0.6 seconds â€“ a truly stunning feat making him much faster than the legendary fictional archer Legolas (played by Orlando Bloom in the Lord of the Rings movies). By testing his skills against moving targets in pretend play larp battles using soft, blunt arrows, Lars has been able to do something many historians are impressed by â€“ testing theory in simulated reality under safe (and fun) conditions.

Putting holes in Hollywood myths
His newest video debunks several Hollywood myths and shows off not only impressive feats like grabbing and arrow in mid-air and firing it back. But to see the ultimate archery trick, you’ll have to watch the video to see for yourself!
There have been many questions as to why the video is â€amateurishâ€. The answer is simple. Keeping the videos very rough and unpolished was a tactic Lars adopted early on to show that this was skill and not SFX, but since there are still still doubters out there, he’s finally considering doing the nextÂ  as a higher production value film. 😉
CONTACT Archery & Interviews: Lars Andersen – kunstmaler@gmail.com / www.23.dk / +45 26 64 92 98 Information about larp: Claus Raasted â€“ claus.raasted@gmail.com / www.clausraasted.dk / +45 22 34 24 80

Thunder Beast ULTRA Series
Number One With a Bullet