Yesterday, I shared a rare but interesting malfunction reported firsthand by Fortress Defense instructor Frank Sharpe, and to say that some feathers were ruffled would be putting it mildly. Predictably, experts from all over were quick to point out that it was operator error (read you’re doing it wrong), there were claims that it was staged (yeah, because who has ever heard of a 1911 malfunctioning?), and of course, there were claims by many that their [insert manufacturer/model here] never malfunctions.

Some of you don’t seem to get it, so let me fill you in on something…

Granted, some guns malfunction more than others, but they all do from time to time. Before you scroll down to the comments to let me know that your [insert manufacturer/model here] has eleventy-billion flawless rounds through it, let me qualify my use of the word “all”.

“All” in this context means every type of gun, not every instance of the type. For example, whether you like Glocks or not, it’s generally accepted that the Gen3 Glock 19 is one of the most reliable pistols ever made. But even with this well-deserved reputation, Gen3 Glock 19’s still malfunction from time to time, malfunctions that are 100% a problem with the gun. I’ve seen it firsthand (for those of you who don’t follow Monderno, I carry a Glock 19 every day). 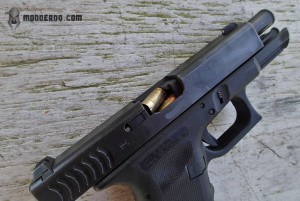 I took the photo above (click for a larger version) of Colion Noir’s Gen3 Glock 19 RTF during a range session a few months back. I was the shooter, and no, I was not limp wristing, there wasn’t anything wrong with the ammo, and this wasn’t the only malfunction from this gun that day. I don’t remember what Collins ended up doing to resolve the issue (hey, it’s not my gun), but the point is, malfunctions happen even with super reliable guns. Yes,Â even revolvers.

So if you’re laboring under the impression that your gun will never malfunction, you’re only fooling yourself. Get some training, learn to clear malfunctions, and consider carrying a backup gun. Because crazy stuff happens.

39 Responses to All Guns Malfunction