Recently I had the good fortune to visit the Houston Laser Shot facility with my friends Colion Noir, Lonnie from Texas Custom Guns and Joe from Patriot Defense,Â to see what Laser Shot was all about. We had a great time, and I came away very impressed with their technologies and what they have to offer.

What is Laser Shot?

First off, if you’re not familiar with Laser Shot, they are essentially a technology company that focuses on providing firearms simulation systems and live-fire training facilities to a variety of markets. Laser Shot systems are used in many different applications, from military and law enforcement to home theater and higher education.

During my time with Laser Shot, I was able to test out several of their systems. 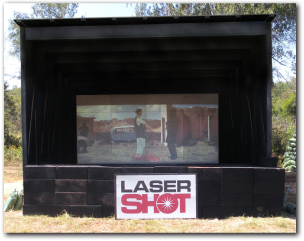 The first system we tested was the Crosshair system. The Crosshair system is essentially a 100 yard outdoor range that allows you to shoot live fire long rifle into a projected scenario. Think Call of Duty, but with real weapons. A scenario is programmed into the Laser Shot system and then projected into their live-fire “theater”.

As you can see from the photo, the Crosshair system placesÂ 3D life-sized human avatarsÂ at actual distances on an outdoor live fire range. This allows the user to reinforce target recognition, target acquisition, anticipate human movement, as well as work on basic marksmanship.

Probably the most impressive part of the Crosshair system for me was that when targets were engaged, everyone within the scenario reacted accordingly depending on whether they are threat or friendly, armed, wounded, etc.

Next up was the Long Range Precision Shooting Simulator (LRPSS) system. The LRPSS is designed to train shooters to make long range shots in the virtual world. Once again, the system is programmed to user’s specifications, includingÂ simulated wind, time of day, elevation, and 3D human avatars, as well asÂ weapon, caliber, scope and reticle.

As you would expect, the LRPSS scenarios are virtually endless. The scenario I ran through was a rooftop sniper engaging threats at 500+ yards using a Leupold Mark 4 with H58 reticle. Obviously getting this sort of trigger time in the real world would be cost prohibitive and logistically improbable, but with the LRPSS, it’s available at any time for just the cost of electricity (once the system is purchased of course). After the LRPSS, we moved on to the Laser Shot Modular Shoot House, which used the Laser Shot Virtual Shoot House (LVS) software as the scenario driver. The shoot house is an impressive setup to say the least. Not only does the LVS software support virtually any scenario, but the shoot house is a completely customizable closeÂ quarters shooting facility. The shoot house supports multiple breaching scenarios including (explosive, pry, ram, shotgun breaching doors and â€œbreak-n-rakeâ€ breaching windows) and has completely modular rooms that can be reconfigured to meet your specific needs.

The shoot house also supports both live and laser fire, so scenarios can be run very inexpensively. We ran through multiple live fire scenarios with both pistol and rifle, and what I found particularly interesting was the shot-by-shot after action reporting capabilities. After each scenario, the LVS software replayed the scenario, and showed where every single shot landed with an anatomy breakdown of each avatar so that we could see what vital organs were hit.

We finished up the day at Laser Shot on the Portable Small Arms Training Simulator (PSATS). The PSATS is a small, portable device that supports various training scenarios and educational software. The system supports both rifle and pistol, and has a multitude of uses from teaching basic marksmanship to home entertainment and everything in between. It literally is a self-contained, portable system that can be setup virtually anywhere to provide training.

Time did not permit me to demo every single Laser Shot system, but of the systems I was fortunate enough to test, I have only scratched the surface of here. Laser Shot’s technologies are pretty amazing, as is the variety of applications that they support. From military and law enforcement training to home entertainment, the possibilities are nearly endless.

To learn more about Laser Shot’s capabilities, check them out on the web. I think you’ll be as impressed as I am.