Take it from an old partisan, learn to shoot left-handed!
â€“ Russian survivor of the siege of Leningrad

I donâ€™t know about all of you, but my support-side shooting sucks. I practice it, just not nearly enough. However, we run support-side drills regularly in our courses, and I encourage my students to spend a portion of every range session on improving those skills.

The common answer: Because there is no guarantee your strong-side hand will be working at the beginning, or through the duration, of your next fight.

Now, as true as that may be, Iâ€™d suggest there is a better (and more probable) reason not often considered – That is: What if Iâ€™m forced to daily carry, manipulate, and draw my gun with my support-side hand? 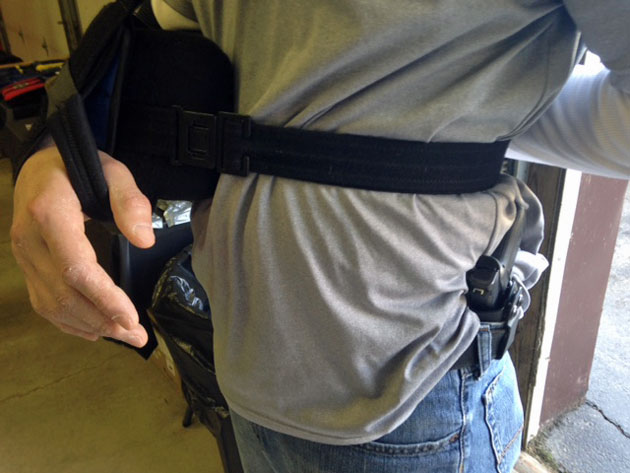 Fortress student stops by our recent open house to show the Staff Instructors his gratitude for prepping him for emergency support-side carry. He made the transition instantly after surgery, and goes about his day as armed and dangerous as he was before!

This past week Iâ€™ve had four people brought to my attention that suddenly lost use of their strong-side arms due to injury – people who carry daily, but are now having to rethink their entire routine. Two of them were our students, and made the transition with little fanfare â€“ the other twoâ€¦well, to paraphrase Lloyd Bridges, they picked the wrong week to stop shooting strong-side.

Today, your carry method may be going just as planned – tomorrow, you may be wishing youâ€™d spent that extra training time shooting support-sideâ€¦and ORDERED A SUPPORT-SIDE HOLSTER. Yes, you need to have the gear in hand, as well. Not only is draw stroke rehearsal imperative, waiting weeks after an injury for a holster to arrive is shortsighted.

We carry to defend our lives from violent felons. And the reason we do it is to make it home to the ones depending on us to be here. Criminals donâ€™t take days off, and they donâ€™t care if we just had shoulder surgery and need the next 6-months to recover. If we consider the daily carry of guns as a necessity, then adding the redundancy of support-side carry to our skill set should be a priority.

9 Responses to Support-Side – Do It Now!