About six months ago, I got my hands on a prototype of Boxer Tactical’s newest belt called the Zenith, and since then, I’ve been using it almost daily. In fact, if you read Monderno, you’ve seen this belt several times over the past few months in other reviews, like in my G-Code INCOG and PHLster ACCESS reviews. 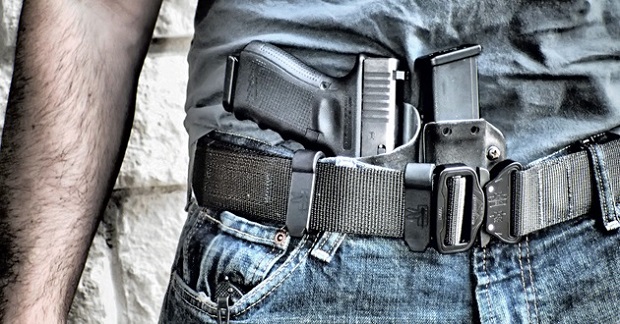 The reason you keep seeing it and the reason I wear it so often is pretty simple: this belt is awesome.

You might remember my review of Boxer Tactical’s other belt, the StrykerÂ (check out that review for company background). Well the Zenith is quite a bit different than the Stryker – more on the differences in a bit – with some unique features in the world of nylon belts. The Zenith is a stiff belt made to carry a load while still being comfortable for everyday, all day use.

The Kydex insert is the secret sauce that makes the Zenith unique. Boxer Tactical sews two pieces of nylon webbing together with a piece of Kydex between them, and this Kydex insert gives the belt its rigidity.

I’m sure most of you are familiar with COBRA buckles and why they are awesome, but just in case, here’s a quick rundown. COBRAÂ buckles are quick release buckles made for load bearing, and cannot be released under load. They are machined from 7075 aluminum, making them extremely strong while still being lightweight. To give you an idea of how strong they are, the regular models have aÂ 9 kN/2000 lb rating.

TheÂ COBRA buckle, made by AustriAlpin in Austria, is the only part of the Zenith not made in the USA. The Zenith has a resin reinforced tongue that is a nice added feature that the first prototype of the Zenith did not have. Boxer Tactical does this to prevent the end of the belt from fraying, and it also makes the belt easier to thread through belt loops. It’s a nice touch and so far has worked as advertised, and prevented fraying on my Zenith.

The photo to the right shows a Zenith resin tongue after several months of use – resin area outlined.

Relating the Zenith’s level of stiffness to you is a bit difficult, but I would put it into the “very stiff” category if one existed. It’s not the stiffest belt I own, but it doesn’t need to be in my opinion.

Generally speaking, I’ve found that super stiff belts aren’t very comfortable for all day use. The reason for this is simply too much stiffness. Belt stiffness is a great example of diminishing returns – there comes a point where more is not more better. You want your belt to have enough vertical stiffness to not curl, and enough horizontal stiffness to not sag with your load out, but there comes a point where too much stiffness makes the belt uncomfortable.

In my experience, belt comfort is driven by how well the belt contours to the curvature of your body. Some super stiff belts, like the ones made from scuba webbing, are awesome for load bearing, but for me aren’t that comfortable to all day use.

The Zenith strikes a nice balance between comfort and stiffness. The Kydex insert makes the belt very stiff, while still allowing the belt to contour to your body. 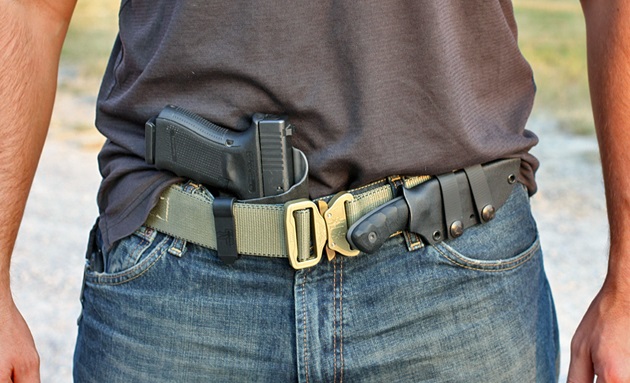 I’ve been using the Zenith for concealed carry for more than six months now, and I’ve absolutely loved it. I have lots and lots of belts from many different manufacturers, so the fact that I keep going back to this one everyday is saying something. It really is a great balance between stiffness and comfort, and does just about anything I need it to do.

The design of the Zenith also lends itself well to concealed carry. The Zenith derives its extra rigidity from its Kydex insert, allowing the Zenith to still have a thin profile. Other stiff belt designs, like the ones that use scuba webbing, put the buckle outside (on top of) of the scuba webbing. While that certainly works, what you end up with is two layers of scuba webbing with a COBRA buckle on top, giving you a thick profile at the buckle.

Having a thick profile at the buckle isn’t the end of the world, but if you carry appendix (or modified appendix as you see here), it does make more of a footprint. You can offset this by moving the buckle a belt loop or two to either side, but the point is, with the Zenith, you don’t have to. You keep a nice, thin profile throughout the belt. The Zenith works very well for all of my range needs, and it’s been through several training days. You can load it up with outside the waistband (OWB) magazine and pistol holsters, a knife and a med kit, and the belt carries the weight no problem. It also allows you to move around without feeling too restricted.

I have not used the Zenith as an inner belt in a battle belt system, but I imagine it would work well given the fact that it’s a relatively thin belt.

As previously mentioned, there are some pretty big differences between the two belts. First off and most noticeable from photos is the buckle. The Stryker uses a solid steel parachute buckle, whereas the Zenith uses a COBRA buckle. The second biggest difference is the Zenith has a Kydex insert, the Stryker does not.

These two differences are what make up the bulk of the price difference between the two models. There are also slight sizing differences (these differences will be resolved in the future), so pay attention to the product descriptions when ordering.

Someone has already asked me which belt they should get, so I’ll go ahead and address that here. Both are great belts. If you need the extra rigidity or the COBRA buckle, it’s an easy decision, get the Zenith. If you don’t need the extra rigidity, don’t care about a quick release buckle, save a few dollars and get the Stryker.

For me, the Stryker is a belt that works great for concealed carry, that can be used for lighter range load outs, whereas the Zenith is closer to a do it all belt. Because of this, I think the Zenith is the better value for most people.

If you couldn’t tell, I think the Boxer Tactical Zenith is an awesome belt. It’s a great design that works for just about everything, it’s made right here in the USA, and all materials used in the belt except the buckle are made in the USA as well. It’s a super high quality belt, and at the time of writing, you can pick one up for $75.

If you’re in the market for a concealed carry or range use belt, I think you can stop looking.

The Lumen Debate
Guns Sales Up, Crime Down