I hate keys.Â  Having to carry a ring of 10-15 keys around in my pocket in whatever configuration has always bothered me, almost as much as seeing the keyring of a man or woman who bought every cute saying acrylic keyring at Spencer’s Gifts or Hot Topic.Â  I often feel sorry for the ignitions of cars when I see 3 or 4 keys, festooned with six bottle openers, 4 lucky charms and two self-defense kubotans.Â

Many people end up with keys that have long since lost their purpose, I know that happened to me more than a few times; two or three padlock keys for locks that had been lost, or mailbox keys for addresses I didnâ€™t live at.Â  I became somewhat of a minimalist when it came to keys but they still ended up on a ring, and that ring may have annoyed me more than ending up with too many keys. 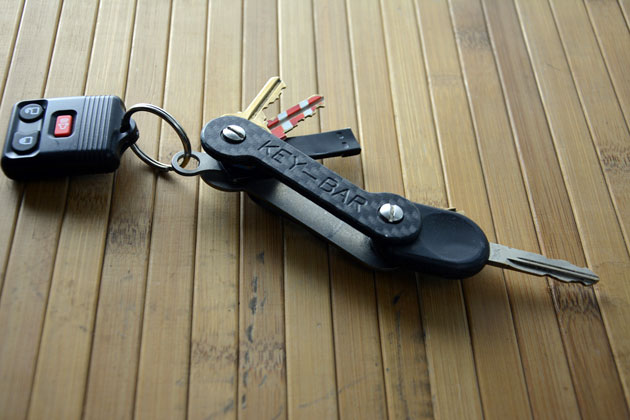 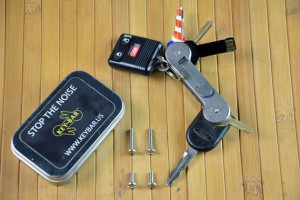 Last October I met the folks from KEY-BAR and picked up one of their carbon fiber kits to test.Â  The KEY-BAR is a somewhat unique key management system designed like a pocket knife; the kit comes with multiple length screws, a pocket clip and an optional eyelet.Â  Keys are added to either end and they can fold into the body of the KEY-BAR.Â  Not the easiest thing to assemble, though not aggravatingly difficult, either.

Since I was already a key minimalist, my KEY-BAR didnâ€™t collect many keys.Â  Truck, gym lock, house keys and one of KEY-BARâ€™s optional accessories, a low profile USB drive.Â  Once I got it all put together, it became part of my every day carry (obviously) and it wasnâ€™t long before I wondered how I ever lived without it.Â  Seriously, where has this thing been all my life? KEY-BAR offers carbon fiber/aluminum (the model I have), anodized aluminum, titanium, copper and many custom color/anodization treatments and they can also logo brand your KEY-BAR, which is pretty cool.

The KEY-BAR isnâ€™t â€œrevolutionaryâ€ any more so than most products on the market, it doesnâ€™t actually change the way you go about your daily life, but it does make life a few seconds easier and that alone is worth it.Â  Months of use with no breakage, no problems and the sweet sounds of silence whenever I needed a key.Â  Key bar offers a number of optional inserts; USB drive, screwdriver, carabiner, small knife and a bottle opener can all be added to your kit.Â  Assembly doesnâ€™t take long at all, in fact it may take you longer to strip your old key ring (and toss out all those things youâ€™ve collected but no longer use/need) than it will to put yours together.

Each kit comes with washers to space things out evenly and the optional eyelet allows you to attach your key less entry controller, or even more keys (if you wish) to the unit.Â  It takes up as much space as a small knife and as an added bonus, isnâ€™t potentially fatal if you fall on it.Â  At SHOT 2015 the lady picked up one as well after taking a liking to mine.Â  Her keyring wasâ€¦cluttered, now itâ€™s streamlined. 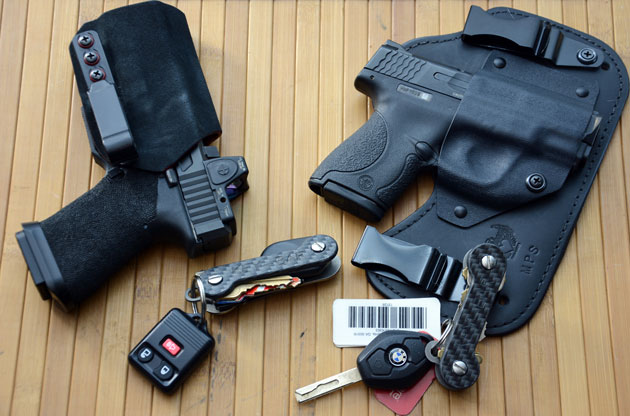 Months and months of daily use; the design is simple and the only moving parts are your keys when you fold them out for use.Â  The included hardware and body of the KEY-BAR is more than stout enough to handle sticky locks, a key is likely to bend before the KEY-BAR breaks.

So will it change your life?Â  No, probably not (unless you have to carry dozens and dozens of keys) but it will make key management so much easier and keep you from collecting all those things that seem like a good idea for the amount of time it takes you to add them to your keyring.Â  If you are tired of the jingle or the angry ball of sharp metal in your pocket, KEY-BAR exists.