Though I am normally an Air Force I or Timberlands kind of guy, I did spend several years working in a police uniform, so I appreciate a well-made duty boot. I wore a bunch of different boots on the streets and on the range but I am always looking for something quicker, lighter, and tougher.

Brandon contacted me about a new wonder-boot from the folks at Magnum USA. I had never owned a pair of Magnums before, but I am always excited to try out new toys and step up my shoe game. Brandon informed me that he had a pair of Mach 2 boots for me to use and abuse.

The Mach 2 boots are advertised as being a lightweight athletic boot. In order to achieve noticeable weight savings, Magnum exercised liberal use of Clarino microfiber. From what I understand, Clarino microfiber is essentially a synthetic leather material, which exhibits the same fiber structure as box calf leather. The Clarino is water and air permeable which allows the boots to breath well in hot climates and dry quickly when wet. The boots contains no metal parts and are probably one of the lightest tactical boots on the market weighing in at about 14 oz, give or take depending on model.

There are several variations of this boot offered by Magnum, including 5-inch, 8-inch, side zip and waterproof models. The particular boots I tested were the 8-inch, lace-up model. They were somewhat water resistant, but not water proof.

Sure, sure. â€œFunction over formâ€ and all that, but we all want to look cool at the same time donâ€™t we? The Mach 2 struck me as a fairly basic looking boot. Though their initial appearance is more modern than black jungle boots, the Mach 2 lacks any visibly exotic features that make it stand out. The Clarino microfiber does take a decent shine though. So police officers looking to wear these with their pressed uniforms can maintain a classy, professional appearance. Itâ€™s like dating the best friend of the really hot girl at the bar. She isn’t a 10, but sheâ€™s at least a 7. 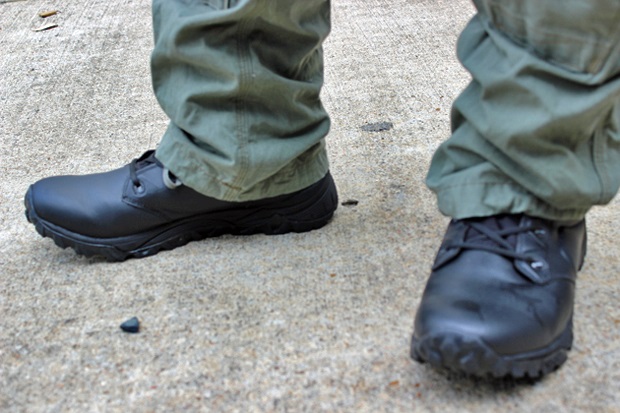 Despite lacking the â€œcoolâ€ factor of boots like the Lowa Zephyrs, the Mach 2 is not your basic black duty shoe. As soon as I slipped these bad boys on, I knew I was wearing something high-tech. The boots felt impossibly light on my feet. There were no uncomfortable â€œhot spotsâ€ and my feet felt cushioned as if I had on a worn pair of sneakers. The pair I had were just a tad big on me. Iâ€™m normally a US size 9.5, but the Mach 2 boots were only available in solid sizes and the pair I had were a US size 10. If you are in between sizes and donâ€™t have particularly wide feet, I would suggest ordering a size down. I just made sure I wore extra thick boot socks and laced the Mach 2 boots up nice and tight. Good to go!

To really see what the Mach 2 boots were made of I put them through a series of tests. Nothing scientific, I just wore them and beat them up the way a working cop might.

First I wanted to make sure the boots would be comfortable after wearing them all day. To test this I devised a stringent test of my own design. I wore them all day. Pass. I also had on the Mach 2 boots while holding a perimeter on a barricaded suspect for several hours. I was in full gear and pretty much just standing around for an entire morning and part of the afternoon. That means if youâ€™re a beat cop that gets stuck directing traffic your entire shift, these boots will support the weight of your duty belt, soft armor vest, and even that box of crullers you had for breakfast without any stiff spots to hurt your feet. 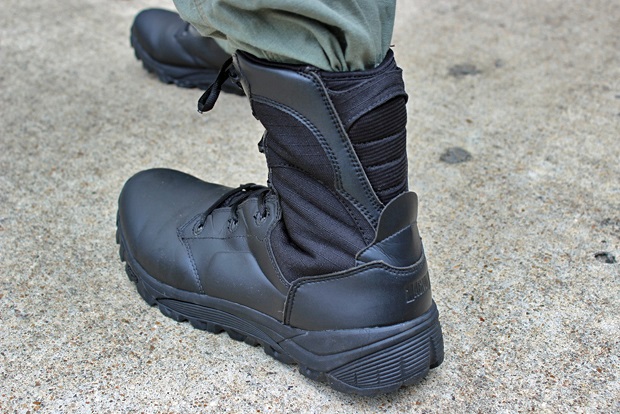 Despite Chief Wiggumâ€™s shenanigans depicted on The Simpsons, some cops do a whole lot more than stand around and eat donuts. The Mach 2 handles the mundane well, but I didn’t think Magnum designed them for convenience store crawls. So I decided to get a little more physical. I wore the Mach 2 boots on several weight vest runs. I put on a 25 â€“ 30 lbs vest, laced up the Magnums, then ran a mile in just under 7 minutes. I was surprised to find that the boots were pretty comfortable during the entire run and the height of the boots didn’t impede my stride and weren’t too tight around my ankles. After catching my breath, I ran three miles at a ten minute per mile pace. I could tell I wasn’t wearing Nikes but the Mach 2â€™s were lightweight, mobile, and breathed pretty well.

The next test involved several Crossfit workouts and a few Insanity sessions. The boots handled box jumps, sprints, and burpees almost as well as low profile exercise sneakers. Although the boots felt noticeably bulkier during these workouts, I was still able to keep up with Shawn T. and all his hopping around without feeling tied down. Normally working out in tactical boots, it feels like my feet are trapped in blocks of cement, and Iâ€™m about to get tossed into a body of water by some hairy guys in track-suits. Not so with the Mach 2â€™s. Part of this was due to the lightweight of the boots and the flexibility they offer in the ankle area. This is great for mobility but the Mach 2â€™s do not provide quite as much ankle support as a more traditional duty boot design. The support was in no way inadequate, but it was noticeable. 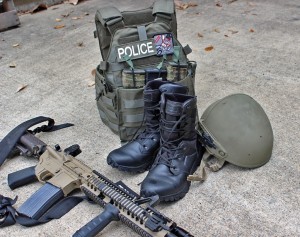 Magnum Boots Mach 2 at the range with 5RT

My last test was the least scientific of all. I just put the boots on and hit the shooting range. I shot several drills with both pistol and rifle. This included moving drills, alternative shooting positions, and team CQB tactics through a shoot house. Predictably, the boots performed admirably the entire range day. The boot uppers are strong and abrasion resistant but offer enough flexibility that shooting from different kneeling, prone, and urban prone positions did not create any discomfort. The uppers are soft enough that you donâ€™t feel like you are fighting the shape of the boot when you kneel. A minor observation is the design of the loop on the back of the boot that you use to help you when you are pulling the boots on. Magnum designed the boot with loops that sit flush, which keeps the cuff of your pants from hanging up when you are moving around. I know this doesn’t seem like a big deal, but it drives me crazy when my pant cuffs start riding up over the loops on my boots. I appreciate the fact that someone at Magnum Boots obviously felt the same way and took the time to ensure the Mach 2â€™s would not exhibit this minor problem.

Overall, I think Magnum Boots has hit a home run with their Mach 2 boot. You wonâ€™t see these boots on any rap videos or runway shows, but they are lightweight, tough, and can handle any law enforcement related job you throw at it. So if youâ€™re a beat cop, a SWAT cop, a desk-jockey, or just a donut connoisseur with a badge, I canâ€™t see you being disappointed with these boots. I predict these will be a popular boot in the tactical community and wouldn’t be surprised if Magnum Boots starts adding different color ways to the line-up.

Today we welcome Vic as a new contributor to Monderno.Â Vic is a full-time law enforcement officer for one of the nationâ€™s largest police departments, the owner of 5 Rings Tactical, a certified ninja, and a good friend of mine. You can learn more about Vic here.

One Response to Magnum Boots Mach 2