I think I can safely speak for the majority of gun owners when I say that taking a blazing-hot soldering iron and playing the Hokey-Pokey with the frame of a pistol isn’t something Iâ€™m entirely comfortable with. It took a good bit of practice on random pieces of plastic and a substantial amount of commitment to finally burn that first tiny indention into my pistol, but I did it anyway. The results were surprisingly satisfying, but the moments leading up to the initial stippling were a little intimidating. Well, fear not, my friends. Brian Noe at Noequarter has taken some of the anxiety and guesswork out of stippling with his pre-stippled M&P back straps. Out of the Box

As soon as I opened the package and inspected the grips, I was impressed. Anybody can attempt to stipple something, but the devil lies in the details. Brian really does an outstanding job with specific patterns and aspects of the stippling. Care is taken to ensure each texture is accomplished correctly with no mistakes. Each back strap is a factory Smith & Wesson product purchased new and then modified per the customerâ€™s request.

Noequarter offers three distinct textures for their back straps and are listed (IMO) from least aggressive texture to most aggressive:

This texture provides a smoother feel thatâ€™s not as abrasive to the hand as its brothers; not to mention it has a very cool symmetrical look to it. The crisp edges of the larger circles deliver a solid grip to the userâ€™s hand and give just a little extra friction for additional control.

Evolving from its namesake, the design mimics that of the exterior of a snake. The aggressiveness of this design is enhanced more than the StingRay by the edges of the its edges being pushed downward towards the magazine well. The texture provides more of a “bite”, if you will, to the interior of the palm. While aggressive enough to provide a good purchase, it’s still gentle enough to afford some shooters the comfort they may desire.

This specific texture is what I prefer on my guns. It carries a much more aggressive stipple and provides a higher-friction contact area for the palm of the hand. The GripTape version allows the user to get a solid purchase on the gun with minimal slippage from the heel of the pistol.

All three are great designs and textures. Youâ€™ll just have to decide what your needed application requires and then make your choice. 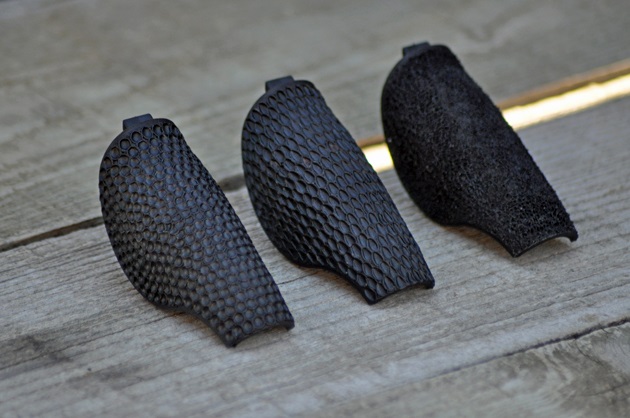 I took all three of these grips out to the range and (with my 9mm M&P Pro) put 50 rounds through the gun with each grip. My plan was to put more rounds downrange with each grip before writing this, but I quickly found that 50 was more than sufficient. I could easily tell throughout the first few rounds and after just one 17 round magazine what the performance factor was on each grip. 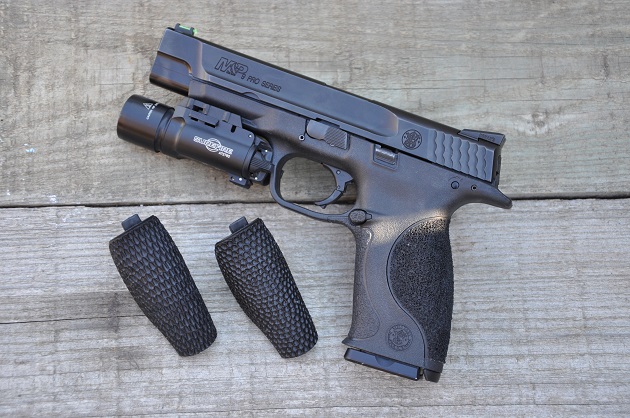 The Texas heat does wonders for testing the moisture-wicking capability (or lack thereof) of skin on a slick, plastic object, so I could tell after 5 minutes these grips were getting an initial â€œtrial-by-fireâ€. Each one was tested and each performed to its own ability. All three provided a good, stable shooting grip. Each grip was able to break the dirt and debris away from the grip when needed and still performed well with some stowaways. Like I said earlier, at the end of the day, I chose the GripTape version as my favorite solely because it gave me the best purchase on the grip, and itâ€™s just what I prefer.

Hereâ€™s the part where I believe everyone can agree. Instead of sending your gun off for an expensive stippling job (which Iâ€™m totally not opposed to) or doing the job yourself and run the risk of possibly ruining a $500+ gun, you can now get a nicely stippled back strap for your M&P with just a few mouse clicks. Additionally, each back strap is only $25 and ships for free, so it doesnâ€™t make much sense not to grab one to strap it on your own gun.

I think the ultimate payoff from going the Noequarter back strap route is resale. Iâ€™m not one to advocate selling your guns, but I have had to make a switch here and there or sell one to buy another; Iâ€™m sure some of you can attest to these circumstances. The next guy or girl looking for a used pistol may not want the sandpaper texturing drawn on by the 2-ton hand of Randy, the local gunshop soldering iron master. I can tell you that I have personally dealt with the hardship of selling a highly modified gun with stippling and slide serrations. Some either donâ€™t need it or donâ€™t understand the benefits of these modifications. So with the Noequarter option, you can easily swap the stock back strap out for the textured one and offer it in the package as an additional incentive to the buyer.

Either way you go, whether itâ€™s the SnakeSkin, the StingRay or the GripTape, you wonâ€™t be disappointed, no matter your shooting preference or every day carry style. They also perform custom work on many other guns from pistols to rifle magazines, so if youâ€™re in need of some stipple work, give Brian a shout.

The grips are available from Noequarter. Also, stay up to date on their Facebook Page.