Every now and then a company will resurrect a product from the dead, and redesigns it for the better. Rogue Gunfighter has done that and so much more with their newly released Low Vis Chest Rig (LVCR). The LVCR is realistically a reproduced and re-engineered version of the US Militaryâ€™s Load Bearing Vest (LBV). For those of you who have been issued the LBV and used it in the past, Iâ€™m fairly certain we can all come to the conclusion that that they were one of the the worst pieces of kit we were issued.

In my experience, the LBV did everything but bear any loads comfortably and practically. Thankfully Rogue Gunfighter has taken the antiquated LBVÂ design and created a new and much improved, comfortable and most importantly a low vis capability in order to make it practical in todayâ€™s world. 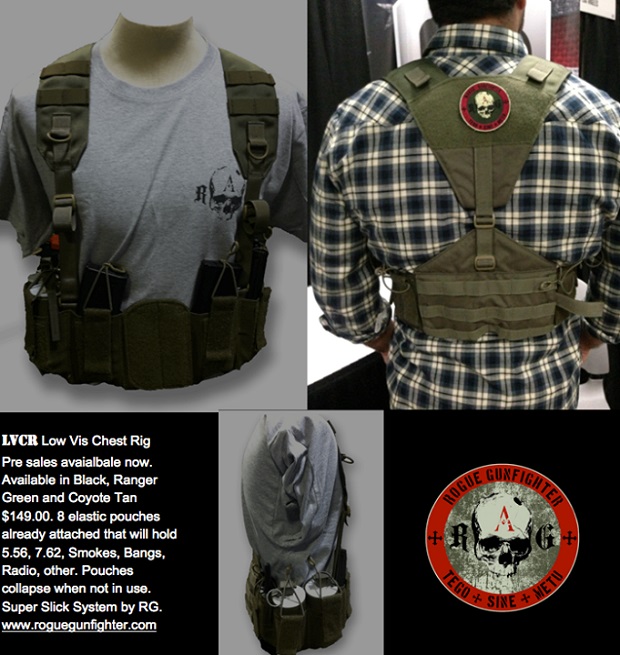 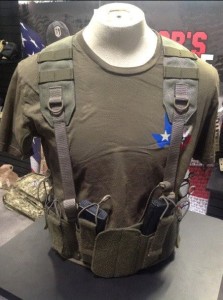 The LVCR has been brought back to life with the latest and greatest materials that 2013 has to offer. As with all of RGâ€™s products, priority number one is being applicable in less than favorable environments where maintaining a low visibility signature is paramount. Compared to its outdated cousin the USMC issue LBV, the LVCR has been brought down to an absolute minimalist approach.

Where there does not need to be material, RG has trimmed away the â€œfatâ€ so as to aid in effectively concealing the userâ€™s tools when being inconspicuous is key. The LVCRâ€™s adaptability and configurability to be able to carry and conceal virtually any additional accessories that the user may need in high threat environments lends it to be a high value piece of gear. 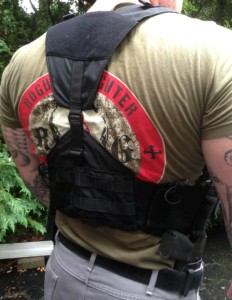 Just as with any traditional tactical vest, the user dons the LVCR through its two armholes and will quickly see that the cummerbund is fully adjustable. To the rear of the vest the user will find a stash pouch for the shock cord so as to be able to configure the LVCR to the proper size. The closure of the cummerbund utilizes a traditional hook and loop Velcro type closure. On the right side of the closure, the user will find a â€œbackerâ€ to close off one side until used in conjunction with the LVR, MOAB or virtually any other form of plate carrier that utilizes soft-sided Velcro on a cummerbund closure. This â€œbackerâ€ when used properly with a plate carrier will actually aid in making the LVCR more secure and to stay in place.

The harness has a triangle shaped yoke on the backside that attaches to the MOLLE compartment that holds that extra shock cord. The triangle shape realistically assists in taking the weight off of the users shoulder and more evenly distributes it throughout the back. Even with four full M-4 magazines, it was extremely comfortable to carry for long periods of time. The forward straps of the harness are fully adjustable as well so the user can have the LVCR ride as high or as low at they desire. The triangle yoke also has soft-sided Velcro so you can put whatever insignia patch you desire.

Unlike traditional LBVâ€™s where itâ€™s basically made up entirely of MOLLE webbing and the user has to put their own pouches on, the LVCR has elasticized pouches and shock cord retention straps already built in. These pouches can fit everything up to smoke grenades, frags, radios or flash bangs and obviously any form of magazine. The retention shock cords also run off of Velcro so as to either be fully stashed away or can be tightened or loosened depending on the product being put in the pouch. There are a total of four on each side of the cummerbund so the user will have more than enough room to fit whatever they need. After the items have been removed, the pouches go back to being completely flat, thereby adding to its low vis nature once again. 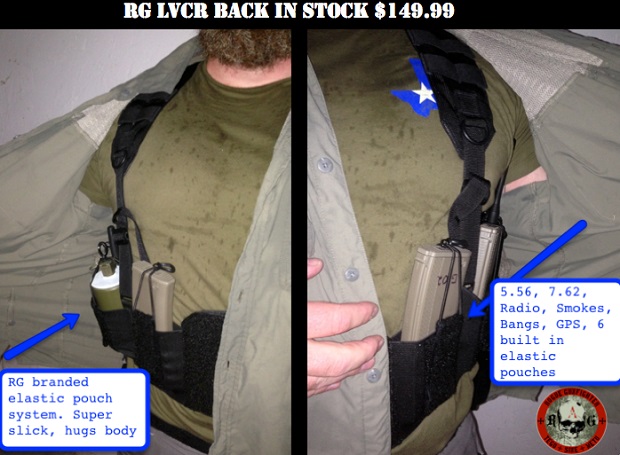 The only real piece of MOLLE you will find on the LVCR is on the backside stash pocket for the shock cord. Here the user can put whatever aftermarket pouches they may need for their specific mission. From more magazine pouches to an IFAK medical kit, there are three rows to put whatever you may desire on it. Personally, unless your mission requires it, I think you should try and keep this MOLLE area slick especially if your requirement is sitting in a vehicle for long periods of time. Sitting for a long duration with something rubbing in your back is never a fun thing.

Rogue Gunfighterâ€™s Low Vis Chest Rig may be the most innovative and revamped accessory concealing rig on the market today. Itâ€™s great to see a company that takes an age-old piece of equipment and totally revolutionizes it from the ground up. Due to its comfort, concealability, and adaptability our boys downrange, or even our hunters stateside, can use the Low Vis Chest Rig.

Whether being utilized solely to hold extra magazines or grenades under a button up shirt, or used in conjunction with an armor carrier, the LVCR should be your number one choice when it comes to comfort and getting to your accessories efficiently.