A little over a year ago I reviewed a pair of the original Inventio-HD video glasses.Â  If you read that review you’ll see that overall I thought the glasses were a good option for recording sports/action video without the bulk of a GoPro or similar recording device.Â  There were some things that I didn’t like about the original glasses and made that clear in the review, so when Brandon asked me to review the new Inventio-HD Pro glasses I jumped at the offer just to see if they had listened to any of the recommendations that I made. 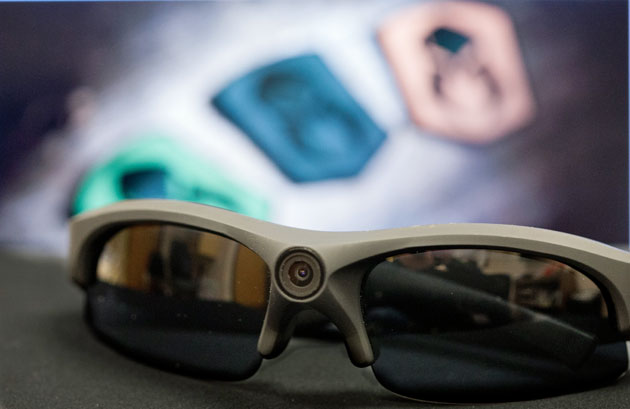 When Brandon asked me to review the new glasses from SpyTec I was curious if any of my recommendations in my previous review had been considered in the production of this new version.Â  When I first unboxed the glasses I was surprised to see that the yellow I disliked so much was gone and the glasses were mostly black with two orange buttons at the front near the hinges.Â  As much as I would have liked them to be black itâ€™s a huge improvement over the bright yellow of the previous version.Â  The other obvious difference over the previous version is the size of the camera.Â  The first version I reviewed had a pin-hole type camera that was not very obvious, whereas this version has a very pronounced camera over the bridge of the nose and really stands out as being a camera.Â  Included in the box was the glasses, soft carrying case, USB cord, two sets of lenses (Polarized and Clear), and a user manual.

The second thing I was impressed to see was the addition of a MicroSD card slot that accepts up to a 32GB card.Â  The 8gb of onboard storage of the previous version was nice but filled up quickly running at 720p.Â  The onboard storage is no longer present but the trade-off is worth it for the expandable storage.

For this review I decided to take the glasses with me on a weekend trip to a lake in my area that I frequently visit.Â  I figured the water would be a good place to test both the camera and the lenses as they were listed to be polarized and the reflection off the water would test the abilities of both.Â  One concern I did have was the glasses ability to survive water as the test I had planned involved some time on my Yamaha Wave Runner.

My first test for the glasses was very simple.Â  It involved making sure I knew when the glasses were recording and when they were not.Â  I decided to do this after losing video from the first test.Â  I was very surprised to find this set of glasses utilized both auditory and visual indicators to show I was in recording mode.Â  The absence of this feature was one of the things I did not like on the previous versions and I was excited to see it on the HD Pro model. The auditory signal is a very loud beep that I could easily hear along with a flashing LED on the right ear piece that can been seen in your peripheral vision.

After making sure I had the operation perfected I decided to set out on a ride to test the battery life.Â  According to SpyTec the HD Pro features a 550mAh Li-polymer battery with a recording life of approximately 2hrs.Â  I found that 2hrs was a little on the optimistic side with my recording time on a charge being just over 1hr 45min of total use but still very close to the advertised 2hr.Â  This is really not an issue as I was running out of recording space on my 16gb card long before I ran out of battery life.Â  Even with a 32gb card you will only see approximately 60min of recording at the full 1080p resolution.

Once I set out on the water I was very pleased to have the polarized lenses in the frames (they also come with a set of clear lenses) and they worked exceptionally well keeping the sun glare off the water out of my eyes.Â  During the ride I started and stopped the video several times and found that it was easily done with one hand and the auditory start/stop signal could be herd over the engine of my Wave Runner. Here’s a sample of what was recorded.

During the ride the glasses were subjected to several direct hits from water splash and continued to function and record without any issues which addressed my earlier concern of the glasses ability to survive water.Â  I would not recommend prolonged exposure or submersion in water but they appear capable of surviving splashes and possibly light rain.

Once I was back to dry land I downloaded the video from the glasses and was surprised to find how well the built in image stabilization worked.Â  While some of the video appears to bounce around a little there is a very noticeable difference in what I was experiencing on the water versus what was shown on the video. With the HD Pro the only dislike I have to mention is the width of the glasses.Â  I have a fairly average size head for an adult male and found that the glasses were a little snug. They almost felt like they were trying to squeeze my head a little.Â  It wasnâ€™t to the point of pain but folks with larger heads might not find them too comfortable.Â  This could be by design to keep them from falling off during any strenuous activity but it could limit the number of people able to use them.

The Inventio HD Pro video glasses are definitely an improvement over the previous model.Â  It offers full HD recording, expandable memory, and both auditory and visual recording indicators making their operation easier than the non Pro model. The camera is a lot more pronounced than the previous version which is not an issue for me but might be for someone looking for a pair of glasses for more covert recording.Â  I was pleased to see the improvements over the previous version and would recommend them to anyone looking for a lightweight, wearable camera that can record in full 1080p HD.Â  They can be purchased through the SpyTec website and various other online retailers with a cost in the $150 range.