Handguns are the staple self-defense tool for nearly every single person reading this article. As much as we may want to have a rifle on hand in the event of an attack, itâ€™s impractical and unlikely. Because of this, handgun technology has continued to improve at a steady pace, ammunition, metals and polymers, sights, triggers, reliability and options have gotten better and the increase in technology is staggering when we look at what options were available just 20 years ago. Of course each significant advancement goes through a period of skepticism; I remember the tail end of the red dots over iron sights on rifles debate that has largely been put to bed. Well, it was revived not long later with red dots on handguns. The reflex sight is getting to be more and more common for range toys and every day carry guns. For a reasonable fee, you can have the slide of most modern guns milled out to accept a specific optic. This optic is usually placed forward of your rear sights and can be co-witnessed with the existing iron sights or floated due to most reflex sights near-parallax free design.

The reflex has become popular for a few reasons, one is because it looks cool (seriously being honest), the second reason (and one some people may not even realize) is that the optic removes a focal plane from our shooting. With iron sights we have to align the rear with the front, identify the target and then come back to the front to shoot. With a reflex sight you simply identify the target, superimpose the reflex dot over your desired point of aim and fire. Two focal planes is better than three, all things considered. A third reason is that the reflex has a shorter learning curve for new shooters and is much easier on the eyes for aging shooters. Oh, and it makes it a little bit easier to hit steel at 100+ yards if thatâ€™s what you are into. 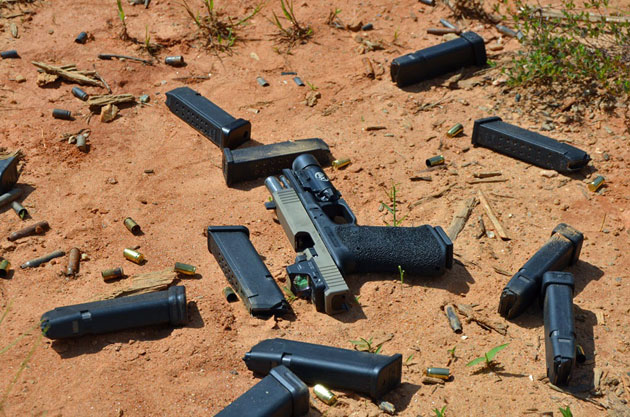 Well if itâ€™s popular, you can guarantee the market will have choices. To date I canâ€™t even count the number of shops and smiths offering to mill slides for optics; some companies are built on custom versions of Glocks or M&Ps and others have taken to the service after its popularity exploded. Itâ€™s still not as common as night sights, just give it time. My first optic equipped handgun was a Glock 17, my second was a Glock 19 that is my current EDC. I warmed slowly to the idea of a reflex sight on a handgun because when I ran optic vs iron sights I was still faster and more accurate with iron sights. It wasnâ€™t a learning curve so much as it was trying to do the same thing a different way. Once I adopted the configuration of optic behind the rear sights (more on that later) I was sold. The only problem I saw is that unlike a rifle where optics can be changed with ease, milling a handgun forced me to stick with whatever I was getting it cut for. Well, not anymore.

Unity Tactical makes a number of face meltingly awesome products; I’ve been using their EXO light shroud for the Surefire X300 for over a year and couldnâ€™t be more pleased with it. They also make a rail mounted hub system called the Fusion for rifle accessories that helps minimize gear foot print and maximize ergonomics (it has a Voltron feel to it that I really dig). Both of those products are simple in design when compared to a handgun, so when I was set to get an ATOM slide for review, I knew I would have to push it just as hard as I push everything else.

The ATOM is built on a Glock slide offered in compact and full size 9mm and .40 S&W. Glockâ€™s reliability is already well known; itâ€™s a simple, functional design that it very consistent and capable of operating in harsh conditions. However the Glock, like all handguns, is designed to operate as engineered. Slide weight, measurements and surface areas are designed with the force of controlled explosions in mind; tolerances are carefully considered to weigh accuracy against harsh performance and when a third party decides to alter these tolerances, weights and measurements, it can adversely affect reliability and performance. If you are going to re-engineer a handgun that someone may just trust their life to, it had better work. Since I wanted to know if it would work when needed, I tried to break it. You cannot hand me something and expect anything different. 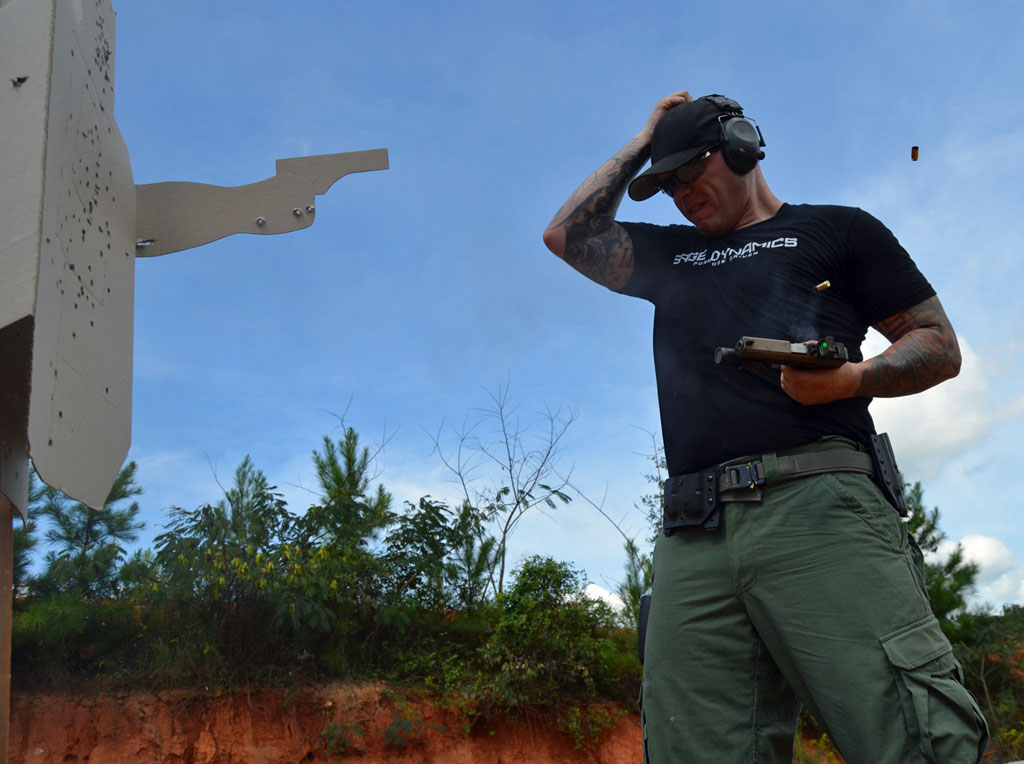 The Demo gun I received was a Gen 3 Glock 17 with the ATOM treatment; slide and the Unity Glock trigger kit, a 4 pound non-adjustable tuned duty/carry trigger. The very first thing one will notice when looking at the ATOM slide is that its milled for a universal plate, not a specific optic. Unity offers six different ATOM adapters that allow the mounting of the six most popular reflex size optics on the market to the ATOM. A handgun that you can change the optics on instead of being stuck with one; thatâ€™s significant. If a new optic hits the market, all you need is an ATOM adapter plate and you can swap optics out in under a minute. I received two adapter plates with my demo gun, one for a Trijicon RMR and one for an Aimpoint Micro. I used both optics throughout the test but still favor the RMR due to its just right size.

The ATOM came to me dirty, I cleaned and lubricated with Fireclean and set to a 1500 round test. 1000 rounds of Magtech 115 gr, 250 rounds of Gold Dot 115 gr and 250 rounds of Gold dot 124 gr. Throughout the test I fired the ATOM from supported, unsupported, barricade and off-axis positions using Gen 2, 3 and 4 Glock magazines. From emergency fire to slow, controlled shot the Unity trigger was crisp and the recoil was what you would expect from a 17.

Even as the ATOM approached the 1000 round mark and had been drug through Georgia clay mud, the slide functioned as if freshly lubricated even though between magazines I could rack it manually and hear the grit building up inside. Under ideal and definitely less than ideal (but realistic) conditions the ATOM functioned as it should. After 1500 rounds of fire without cleaning I experienced no failures. As most people are not going to push their firearms more than a few hundred at a time between cleaning and will likely defend themselves with a clean weapon, knowing your chosen weapon will perform as well into the thousands of rounds as it does on the first is important. 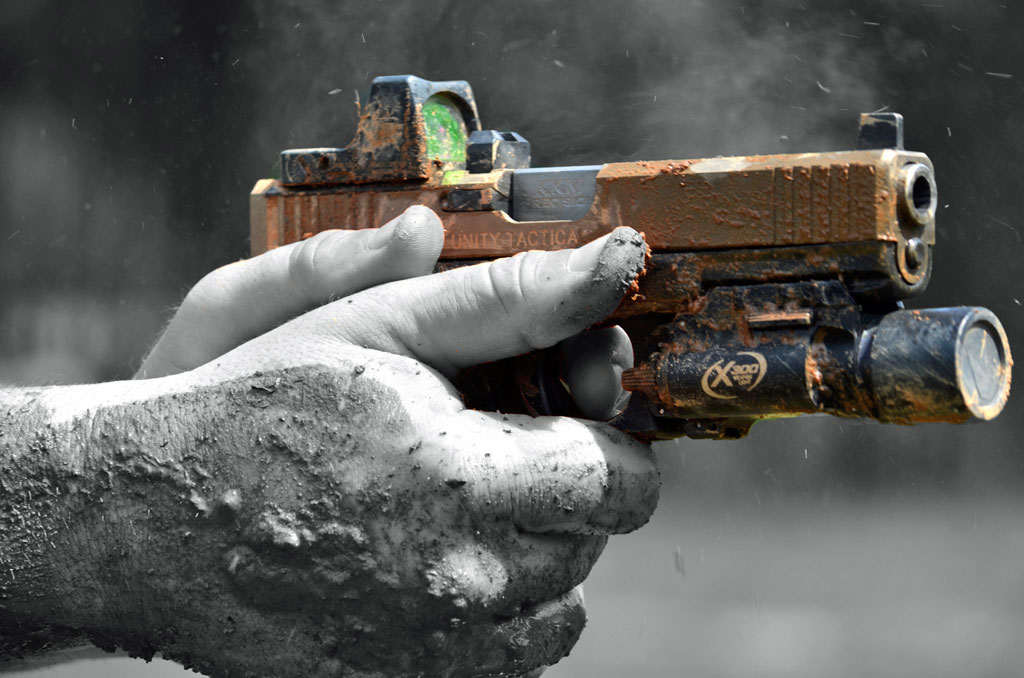 As expected, the Unity trigger passed drop testing and partial-press reset (an issue with some of the budget aftermarket triggers in which a partial squeeze and then release of the trigger will not reset the trigger safety, allowing for an unintentional discharge if the trigger is further manipulated by incidental contact). 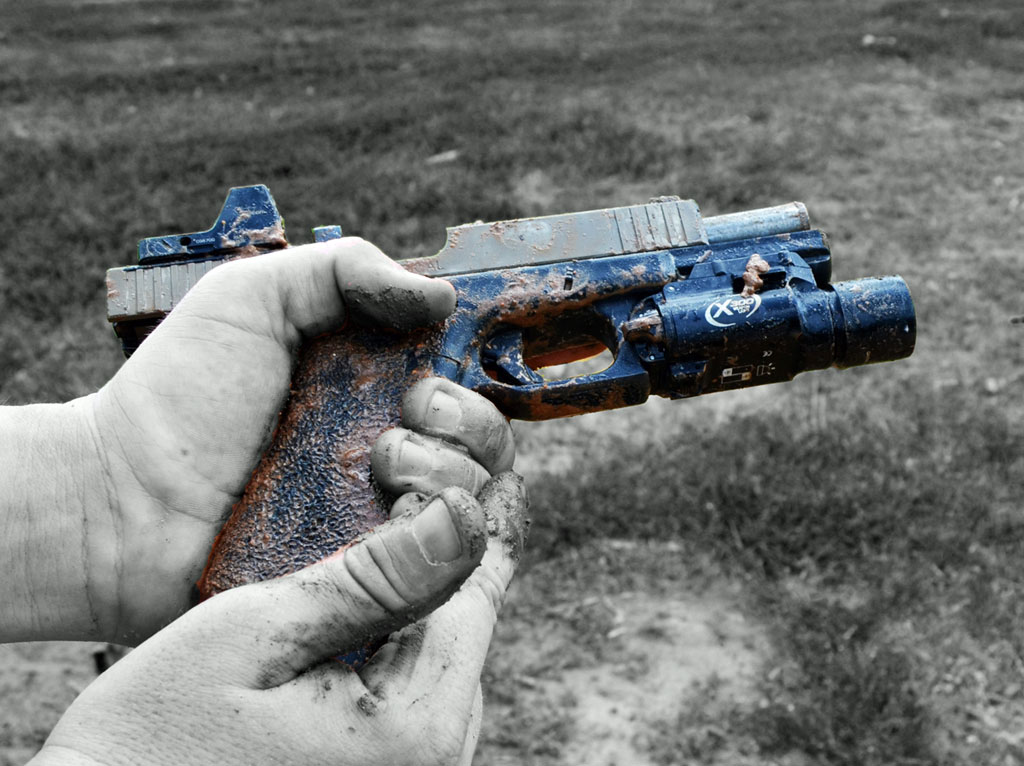 Another aspect I tested was return-to-zero of the optic. As it is removable, I removed it and then reinstalled and found that the zero was functionally the same (itâ€™s obviously much easier to tell on a rifle than a handgun). The mounting plates attach via a single screw on the side of the slide, which may be a cause for concern as it seems like everything in the free world take at least 2 screws except for a lot of optic mounts. The adapter plate channel is dove tailed deeply and the screw remained tight throughout testing. No optic shift is a plus.

The ATOM comes with a KKM Precision barrel, taking care of one of the biggest parts of the accuracy question. As for the sights, Unity places the rear sights forward of the optic on the ATOM, where they belong. The iron sights on an optic equipped handgun become the backup sights; if the rear sight is mounted behind the optic, there is a tendency to track it first (especially with those of us who have been using iron sights since day one on handguns) and then track to the dot/target, this needless accommodation shift in our vision slows our time to target. Placing the rear sight forward of the optic removes this problem and leaves the sights in place in the event they are needed. 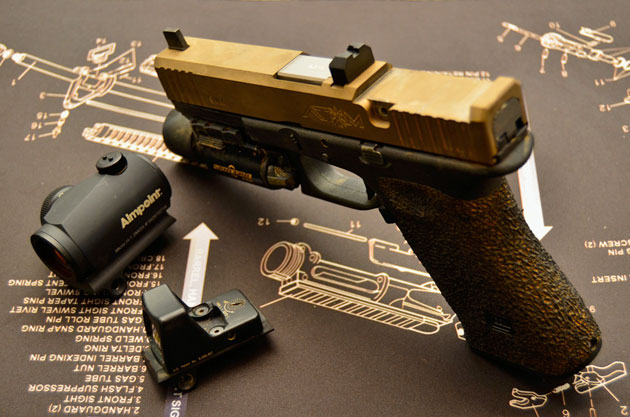 Some shooters donâ€™t prefer this configuration because they believe the reduced sight radius is going to be useless at distance. It is very useful, if needed, for realistic handgun distances. Even on the edge of what I consider to be a probable handgun distance, the ATOM consistently hit steel 8â€ plates at 35 yards and provided a very respectable group on paper at 25. True, the sight radius is less than that on a subcompact Glock but for practical accuracy itâ€™s not an issue.

As to the optic, proper zeroing is a must and this may take some literal trial and error depending on the optic you choose. Once I had the 3.5 MOA RMR tuned to the ATOM at 25 yards, I had little difficulty getting steel strikes at distances out to the ridiculous-for-a-handgun 100 yards.

Honestly the only thing I didnâ€™t like about the ATOM demo gun was the frame work. The trigger guard had an undercut, which is a must for me but this specific under cut was a bit too rounded and a bit too shallow for my liking. Since that has absolutely nothing to do with the review of the ATOM slide, its irrelevant but I felt like I had to mention something I didnâ€™t like and that literally was the only thing I could think of.

I like the ATOM a lot and I donâ€™t want to give it back. If you have not made the jump to an optics platform in a handgun, ATOM slides can be had for less than $500 and adapter plates are under $60; an investment to be sure considering the cost of reflex optics. Believe me, I know because now I’m saving up for an ATOM and you should be too.

One Response to Unity Tactical ATOM