At SHOT Show, I had the pleasure of meeting Doug from ATEiÂ and Trek from MDFI. During our conversation, they told me an interesting story in which I learned something new – top slide serrations aren’t just forÂ single hand slide manipulations. 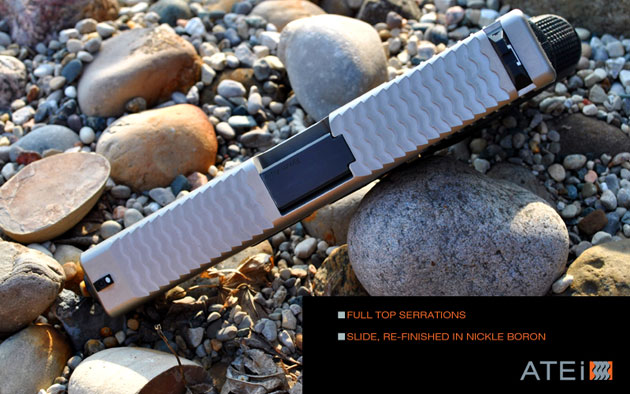 After hearing the story, I asked Doug and Trek if I could share, and they said yes as long as no names were used.Â The story below was written by the person to whom this happened, who was kind enough to relate the events in his own words (I only fixed typos). Make sure you check out the cell phone pics at the end.

Okay here goes, I will try not to make this one giant run on sentence but I am typing it on an iPad so no guarantees…from here on out the offender will be referred to as “Zombie”.

I was sitting at my kitchen table reviewing a pile of paperwork that I had just received from my insurance agent via mail due to the fact that my wife’s car was stolen out of my driveway the previous day. It was approximately 6 PM give or take and I heard my gate scraping my driveway which is not uncommon when the wind is blowing at a high rate. The problem was that the wind was not blowing particularly hard and there was little reason for my gate to be opening on its own. It was completely dark outside (December-ish) and I looked out my kitchen window, but being that my backyard light was not switched on I could see next to nothing. So I grabbed my Glock off the top of my refrigerator where I usually keep it while I am not wearing it due to the fact that I have a 6 year old son that I obviously want to have no access to.

I slowly opened up the back door which leads into my fenced backyard and looked to my left and noticed my privacy gate opened approximately halfway. I stepped outside and looked to my right and noticed Zombie facing away from me and it appeared as though he was attempting to gain entry to my shed which is padlocked and roughly 40 feet away from where I was currently standing.

He covered that 40 feet in what seemed like about 32 milliseconds and I hit him in the face with the only thing I had available at my disposal, a Glock 19. I took a wild swing hoping to break his nose into 50 pieces and missed, I ended up hitting Zombie above the left eye, he stopped, I staggered back a couple steps and dropped my gun. Yeah, I dropped my gun.

I grabbed him by his hooded sweatshirt and was able to get him on his back and began beating him into the pavement which by the way seemed to have little effect on Mr. Zombie. He didn’t put up much of a fight and he didn’t make a sound (very eery for somebody who is getting beaten). Zombie was missing a strip of skin at the impact site and I remember thinking how funny that was. He finally began fighting after a few seconds and that is where my right fist went full bore into the concrete. Ouch.

I had my left hand grasping his hoodie around the drawstring area of his hoodie and that is the point that he flipped me off to his left side, proceeded to get up and bolt for the open gate. I got my old ass up and chased him out the gate and stopped near the end of my driveway as he jetted east towards River Drive. I stopped because I had 2 kids in the house alone, and a Glock laying outside my back door.

It didn’t really hit me until about a half hour later what had just happened. It was a cold night, Zombie only had a hoodie on, was apparently impervious to pain, was either trying to break into my shed, or trying to sexually molest my master lock (not sure which) and he had zero expression on his face and didn’t say a word. I was asked how long the whole encounter lasted but I cannot answer that. Somewhere between 10 seconds and 10 hours would be my best guess. 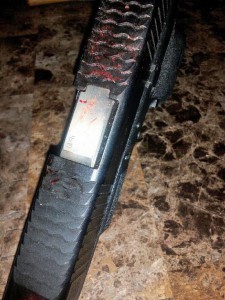 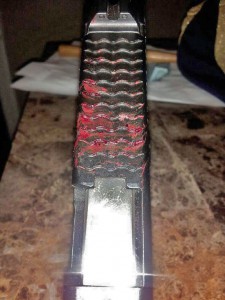 It’s easy for me to sit here in my comfortable office chair and say “I would’ve shot the guy”, but I wasn’t there. I think it’s safe to say that if all else fails, hit the bad guy in the face, ATEi slide serrations first. Ouch.

17 Responses to Another Use for Top Slide Serrations