The wait is over, 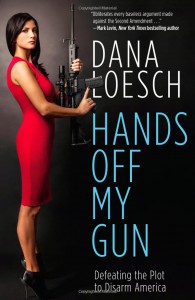 Dana Loesch’s new book Hands Off My Gun: Defeating the Plot to Disarm America is now available. If you’re not familiar with Dana, she’s a conservative talk show host, blogger, TV commentator, and she hosts her own show “Dana” on The Blaze.

“Hands Off My Gun” is a look at the original intent of the Second Amendment and why the right to keep and bear arms was included in the Bill of Rights. The book also explores the history and intent behind the push for more gun control.

How many people in America today are truly well-versed in the history of the Second Amendment, and why it was included in the Bill of Rights?

In HANDS OFF MY GUN, Dana Loesch explains why the Founding Fathers included the right to bear arms in the Bill of Rights, and argues that “gun control” regulations throughout history have been used to keep minority populations under control. She also contends that current arguments in favor of gun control are primarily based on emotions and fear.

This narrative is a must-read for every Second Amendment supporter. Dana Loesch is a determined and fierce advocate for those rights and shouts out: hands off my gun!

I haven’t read it yet, but I look forward to doing so. Available now at Amazon.

2 Responses to Hands Off My Gun: Defeating the Plot to Disarm America