As an instructor that teaches self-defense, I wonder every now and again in the back of my head if I ever had to utilize my methods, would I be able to? Unfortunately, I almost had to find out recently as I was leaving work in the wee hours of the morning.

Before I go any further Iâ€™ll hit on why I just used the word “unfortunately”. Personally, I donâ€™t care whether you’re law enforcement, military, personal security, etc, I hope none of you in any of these professions have to utilize deadly force on another in your lifetime. Itâ€™s somewhat of a double-edged sword of what I passionately teach. On one side I teach people how to protect themselves and their loved ones in a â€œworst case scenarioâ€ utilizing deadly force if necessary, but I also hope they never have to actually use the methods I teach them. If my students can verbally deescalate a potentially deadly situation by never going for a lethal implement or simply remove themselves from said situation, that is one of the best possible outcomes.

Sometimes though, we canâ€™t deescalate and we can’t leave, and we have to deal with the situation at hand in order to go home to our loved ones at the end of the day. That is exactly the position I was in as I was in my car trying to go home after work. I work security for a sports bar/club in Boston and it requires me to work until about 2:00 AM, which by Boston law is when all bars have to close. The hours work well with me as a full-time college student, itâ€™s fairly easy and itâ€™s only a 30-minute drive from my apartment. Overall, the guys I work with have my back and I have theirs in return.

This evening I had to park at a different parking garage a few blocks over because the garage my friend and I usually park at was closed for restoration. I tried to find on street parking, but like any typical Saturday night it was like trying to find a needle in a haystack.

It was another normal evening, overly intoxicated patrons were dealt with accordingly and I said goodbye to my buddies as I left to walk back to get my car and get some much-needed rest. Now usually I walk back with my buddy because some patrons donâ€™t seem to enjoy us asking them to leave (sometimes forcefully) and they threaten us by saying they remember our face and whatnot. Just for safety purposes I try to walk in at least pairs, especially considering that when we leave for home (2:00 AM), so does the rest of the city.

I started carrying my Glock “26L” the previous weekend, and as I was leaving my normal parking spot last weekend I thought to myself that carrying the gun was pointless. My thinking was that itâ€™s likely to cause more harm than good in a crowded area such as a bar with heavily intoxicated people, and the chances Iâ€™ll actually need it on my walk back to my car, since the parking garage is directly across the street from my work, are slim.

Lo and behold as I was driving out of the parking garage, crossing the street are 10-12 males in their early to mid-twenties that had just pulverized a man about the same age, who was thankfully alive and hobbling away with his girlfriend. Now understand that I “came on scene” after the incident occurred so I have no knowledge of what happened prior. Maybe he deserved it or maybe he was just an innocent bystander. Either way I saw cops approaching the battered individual.

This incident led me to realize that situations like the one I witnessed are why I carry. Not to deal with intoxicated patrons, hell I can verbally talk most of them into walking themselves out of the bar. I carry it for situations I may end up in when I get out of work. The “zombies” are real, they are out there and I just want to go home to my family.

People have different perceptions of what “zombies” are, especially with TV shows such as “The Walking Dead” or George Romeroâ€™s series of “Dead” movies. Even though the way the virus can be contracted differs throughout fictional story lines, the end result is virtually the same. A corpse has been reanimated from death, has very limited or nonexistent fine motor skills, and for the most part is slow moving and has a desire to consume the flesh of other living human beings. Now even though a few parts of that description are fictional (at least I hope), I believe that real zombies do exist and we have to be aware of them.

If you look into drug addicts or heavily intoxicated people, they technically meet a few of the characteristics of Â the “traditional” zombie. They are usually slow moving, have very limited fine motor skills, limited brain function and have an end desire. For drug addicts this desire may be getting another hit of their needed substance, and for an intoxicated person it’s sometimes starting trouble.

For the most part, you have the intoxicated person who either just wants to dance, hug everyone, have fun or eventually pass out – these types usually are a harm to no one. On the other hand, you have the intoxicated person whose anger starts to show after a few drinks, has a high temper and eventually starts fights with anyone who rubs them the wrong way. These are the ones you have to be aware of and avoid whenever possible, especially if theyâ€™re in large groups.

This is exactly the situation I was stuck in when I was leaving the parking garage that night. All was going well, I didn’t encounter any of the angry zombies and I was driving out of the garage when I got stuck in partial gridlock. It seemed that the people in the car at the front of the line had too much to drink and were having issues paying for their parking ticket. A few minutes waiting turned to five and thatâ€™s when the parade of car horns started in. 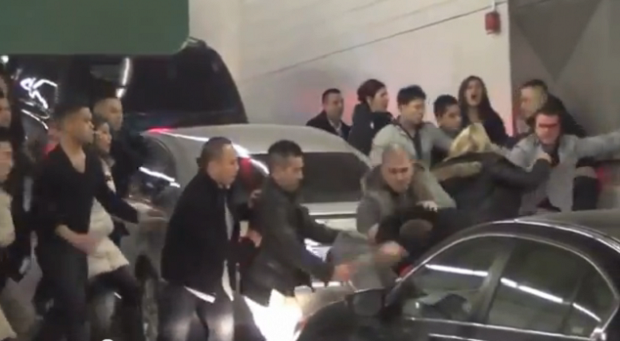 The people in the very first car didn’t enjoy being rushed and beeped at, so they got out of their car and started yelling at the car to the rear of them. Obviously that car didn’t like being challenged so they got out as well and soon after there was yelling and immediately a brawl started. Cars were being hit, bodies were smashing together and cars were still honking. Now hear I am, at 2:30 in the morning in my vehicle alone, gridlocked in a parking garage and armed surrounded by heavily intoxicated people. Not exactly a great situation to be in.

Here is where I knew things could go south for me in a hurry. I knew Boston PD would not get there in time and the employees of the garage amazingly barricaded themselves in their room all the while watching this mob scene occur.Â  A similar situation happened in January of this year in another part of Boston I worked at, so I knew this could do anything but get better.

As I started to see the fight spilling up the ramp instead of out to the street, I had two immediate options I could take.

Well, seeing how Massachusetts law does not recognize the “Castle Doctrine” and states that I have a “duty to retreat” first, legally I only had one option. Note that as all of this is occurring, all of the other heavily intoxicated occupants of the vehicles in line started to spill out of their cars and either started to take video or wanted to be the hero and jump into the brawl.

Thankfully as I was processing these decisions the massive fight diminished, the line was back to moving and I was on my way home. On my drive home I realized I was absolutely terrified and if it proceeded to get worse, there was no way I could make it to the garage emergency exit in time. All I could see going through my mind was the headline â€œTrained Firearms Instructor Kills Multiple Intoxicated Patrons with Concealed Handgun.â€ Would I have been able to realistically utilize a lethal option? I honestly donâ€™t know, and that terrifies me.

This was a potentially deadly situation that could have gone one way or the other. Thankfully it diminished quickly and so fast that the Boston PD didn’t even end up showing up. This is a scenario where you have to decide for yourself, are you going to be able to physically escape and evade or barricade and defend. That’s a decision that no one can answer for you. It all boils down to your training with a firearm, your physical fitness and more importantly, understanding the laws of utilizing deadly force in your state.

What I can help you with is asking, have you ever trained shooting a pistol inside of your vehicle? Do you understand the deviation of your round after it impacts glass? Have you ever trained shooting multiple targets realistically and in context as well as have you shot your handgun in extreme close quarters (ECQ)? Do you have enough physical activity under your belt that if you do decide to escape and evade, that you know you will be able to outrun the ensuing mob that wants to do your harm?

These are many of the questions that you have to answer for yourself honestly. For me, there was no perfect choice for in this situation and I was lucky that it didn’t proceed to something worse. At the end of the day, you should push yourself past your comfort zone because you may end up in a situation where your life or the life of your loved ones hangs in the balance.