One of the perks of being both a cop and a gun nut is the fact that I occasionally get to enjoy my hobby while getting paid.Â  In addition to being a gun nut I am also a self-proclaimed geek.Â  I love to research stuff that interests me and my latest research project just happens to combine both work and guns.

For years I have heard discussion after discussion about how the .45 ACP is the only true â€œman stopperâ€ round and anything else is just inferior (especially the 9mm).Â  These same folks will usually make virtually the same argument about .308 vs. .223 and how the worst decision the US Military every made was switching from the first two rounds I mentioned to the last two I mentioned.Â  My most recent run in with this discussion happened in a local gun store not too long ago.Â  So after years of hearing this argument my inner geek took over and I decided it was time to do a little ammo research to see how well the ammo I trust my life to works.

I started my research with an article in a recent issue of Law and Order Magazine that I receive.Â  The author of the article attended a Wound Ballistics Workshop that was sponsored by ammo manufacturer ATK.Â  If you are not familiar with ATK they are the parent company of Federal and CCI/Speer.Â  The main point I want to highlight from this article is the comparison of bonded ammo to non-bonded ammo.Â  The most important thing to consider when talking about bonded or non-bonded bullets is what caliber you choose to carry and what you may end up shooting through.Â  ATKÂ  says that in velocities over 1000 FPS (so just about everything except .45 ACP) the copper jacket will separate from the lead bullet in a non-bonded bullet when shooting through glass.

IfÂ you’veÂ made it this far and you’re asking yourself â€œwhen will I have to shoot through glassâ€ my answer to you is this: What if someone is trying to attack you and youâ€™re still in your car and there is not enough time to get out? Your bullet choice and how it performs going through glass could be the difference between surviving or not.Â  So now that we know bonded bullets perform better in certain scenarios, do you know if your chosen defensive round is bonded? Â I will give you a little help and point out that of the two most popular law enforcement duty rounds (Federal Tactical HST and Speer Gold Dot) manufactured by ATK, Federal Tactical HST is not bonded but the Gold Dot is.

So now that we know bonded is better letâ€™s tackle the â€œwhich caliber is betterâ€ debate. Two of the most important things to consider are bullet expansion and bullet penetration, and both are far more important than what size the bullet is when it leaves the barrel.Â  For this information I again turned to the ATK website and their ballistic testing.Â  Below is a chart that shows the test results of the Speer GDHP in the three of the most popular law enforcement and personal defense calibers. 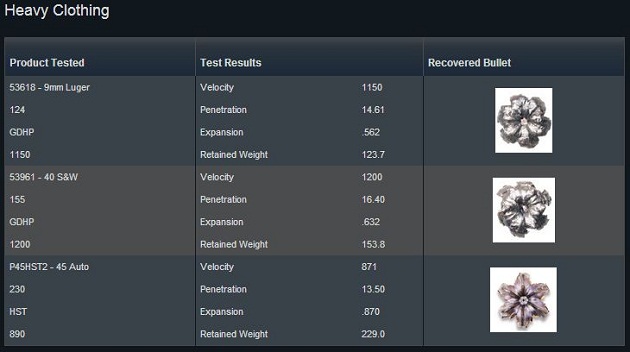 When you look at the results of the tests through heavy clothing you will notice that when it comes to penetration the .45 ACP is outperformed by both the 9mm and the .40 S&W. Also, while the expansion values are not significantly different between the .40 and the .45 rounds and the 9mm is really not that far behind either.Â  When it comes to stopping a threat expansion is good but penetration is better. Why is it better? Because deeper penetration is more likely to reach vital organs such as the heart, thereby affecting the body’s ability to distribute blood. Affecting the body’s ability to distribute blood is one of the two main ways of physically stopping the human body (“stopping power”), the other being to shut down the central nervous system. The FBI standard for penetration is 12-18 inches, and if you look at the chart all three bullets meet the FBI standard, with the .45 being on the low end, the .40 on the high end, and the 9mm in the middle.

I think the best way to sum all of this up is the great caliber superiority debate is dead.Â  You should worry more about what type of bullet you are using and less about what size it is. Â The reality is that if you’re using modern hollow point defensive ammo they are all going to perform about the same; and now that we know that we can move on to what is really important: shot placement.

The best ammo in the world is only as good as the person behind the gun makes it and ONLY HITS COUNT!

30 Responses to The Great Ammo Debate