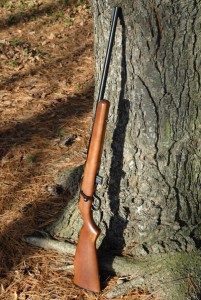 A few months back I wrote an article about choosing your first handgun, as it’s a question that I get quite often. Lately I’ve also had an increased number of questions about choosing a first rifle, particularly for a new rifle shooter, as well as choosing a first “battle rifle”. We’ll save the battle rifle discussion for another day if there’s enough interest, and today talk about a first rifle.

This one is actually pretty easy for me to narrow down – if you’re looking for a first rifle, a rifle that you can learn to shoot with, then buy a bolt action rifle chambered in .22 LR. An excellent example would be the Marlin XT-22 that Dan reviewed a while back, but there are many good ones out there.

This one shouldn’t be much of a mystery. I recommend the .22 LR because it’s cheap to shoot, has extremely low recoil and isn’t very loud. For new shooters, these are all really good things. When trying to learn the fundamentals of shooting, the last thing you want is to develop bad habits because you’re anticipating recoil. Additionally, .22 LR is an excellent small game hunting cartridge, so you’ll also have a very useful rifle.

The reason I recommend bolt action over a semi-auto for most shooters is because bolt action rifles are simple to operate, they are very accurate in trained hands, and they help force a new shooter to slow down and make every shot count. Hand a new shooter aÂ Ruger 10/22 with a 25 round magazine and if they are anything like me, they’ll proceed to dump the mag, because, well it’s fun. In my experience teaching people to shoot a rifle, bolt action rifles tend to curb this tendency. Having to work the bolt between shots forces the shooter to slow down and think about the fundamentals instead of rushing to the next trigger squeeze.

Sticking with the .22 LR theme, if you’re looking for a first rifle and you don’t want a bolt action, there are two semi-automatic rifles that I own and recommend: the aforementioned Ruger 10/22, and the Marlin Model 60. Both are excellent rifles.

Hopefully this helps someone who is looking for a first rifle but doesn’t know where to start. Have a suggestion? Leave me a comment below.

8 Responses to Your First Rifle