Coye Knives today announces a new custom fixed blade based on the ever awesome Ridgeback called theÂ ForeRunnerâ„¢, and we’ve got your first look.

I can already hear fans of the Ridgeback groaning, but do not let your heart be troubled, because theÂ ForeRunnerâ„¢, which again is based on the Ridgeback, is everything you loved about the Ridgeback and more. The best way to see what has changed is to see them side-by-side. If you look closely you’ll see the differences. More sweep, more curve, more ergonomics. Additionally, the custom Kydex sheath has been completely redesigned to be more streamlined and concealable, and should allow a better “full grip” on the knife when drawing.

Personally, I can’t wait to try one. Here are some more ForeRunnerâ„¢ photos courtesy of Coye Knives. 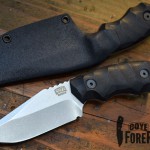 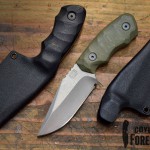 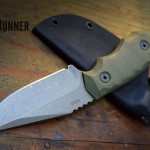 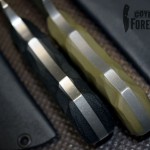 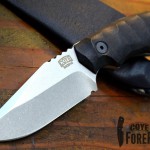 If you’re anything like me, you want aÂ ForeRunnerâ„¢ as soon as possible. To keep up with availability, I suggest signing up for the Coye Knives newsletter, and following Coye on social media (links below). I’ll have more information on availability next week.

â€œYou spoke and we listened. As an evolutionary change to the Ridgeback design, the ForeRunnerâ„¢ offers several upgraded features while staying true to the original design concept,â€ Coye says. â€œWith more handle depth, swept finger choil, additional thumb jimping and scalloped handle area, the ForeRunnerâ„¢ now has even better ergonomics but still maintains the basic form factor pioneered by the Ridgeback. Additionally, the custom made kydex sheath has been redesigned as an even more compact carry system for greater concealability.â€

Custom handmade versions of the Coye ForeRunnerâ„¢ will be available April 21th, 2014 and can be purchased initially on CoyeKnives.com, and then through authorized dealers. Make sure to connect with Coye Knives on Facebook and Instagram for more information.