Last weekend I attended the inaugural Carbine Home Defense class by 2 Vets ArmsÂ in the Houston, TX area. The class, which was born from a late night conversation I had with Dean Brandly, was geared towards defending your home with a semiautomatic rifle, but nearly all of the instruction we received translates to other weapon platforms as well.

I was fortunate to have a bunch of friends join me for the class, including Monderno contributor Matt, my buddy Brad from MADCAT, Nam, Rachell and Jeff from Houston, and Colion Noir. 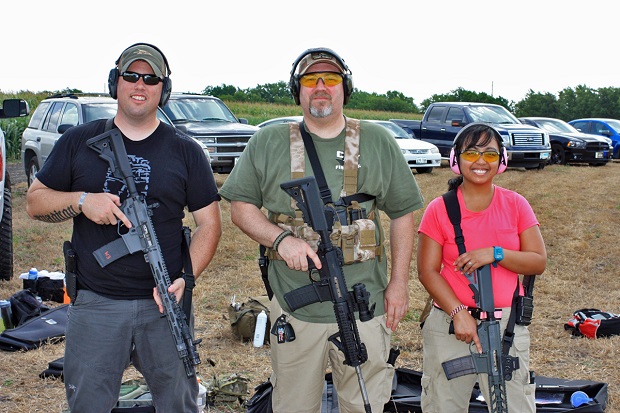 I used my 2 Vets Arms custom 5.56 LRRP for the class. I will be reviewing this rifle soon, but the short version is that it’s awesome and you need one. Along with my 2VA LRRP, I had a Glock 17 with INFORCE APL riding in an Armordillo Concealment OWB kydex holster. I ran drills both with and without a chest rig, sometimes reloading from a mag stuck in my back pocket, and sometimes from my HSGI AO Chest Rig with Double Decker TACO pouches.

The class was divided into two parts, morning and afternoon. The morning session was conducted outside on the range with live fire, while the afternoon was conducted inside the “shoot house” with training weapons only. Being Houston, this worked out really well, as we were done with the outside part of the class before the worst of the heat set in. While it was of course hot in the morning, we were spared the hottest part of the day.

After a thorough safety briefing, range rules and orientation, we got started on the live fire portion of the class. The morning session covered the following topics:

Students were asked to bring a minimum of 200 rounds, with a maximum of 300 rounds needed. Being the overachiever that I am, I brought about 400 rounds (more if you count what stays in my truck at all times), but only needed around 200 of them. The drills ranged from 7-25 yards with a focus on moving properly and safely with a weapon while still putting rounds on target.

The morning session wrapped up with 30 minutes or so of free time, during which I got to spend some time talking to other students and trying out a few of their rifles. Most of the students had AR-15’s, but a few had other platforms including AK variants, and two students hadÂ IWI Tavors. Since the Tavor is a relatively new gun to the US market and a bullpup design, I was a little surprised to see this. After briefly handing and shooting one of them, I was again surprised, this time by how much I liked the little carbine, aside from the trigger.

At this point we broke for lunch at a nearby Mexican restaurant, where the folks from 2 Vets Arms bought us lunch.

The afternoon session was conducted inside the the on-premises house, which is currently being renovated into a clubhouse for future training events. We started off with instruction on home defense mindset and home/close quarters fundamentals, and ended the afternoon with each student being given a scenario that they had to work through.

My scenario was that I returned home to find my front door compromised. Being a concealed carry permit holder, I had to clear my house with what I had on me, a Glock 19 (laser training weapon, not live fire). Please note that this was a training exercise. Most of the time the proper thing to do in this situation is remain outside at a safe distance and call the police. I should also note that each student was given a different scenario, and that these scenarios were based on real world cases. Back to my compromised house.

Once I entered the house and made it through the entry/kitchen area, I found two men on the floor eating chips and drinking Tequila, visibly intoxicated. The drunks were unarmed (that I could see) and on the floor, so I moved to a position where I could cover them from a safe distance while still being able to cover the rooms behind them. Because there’s always a guy in the bathroom with a gun, right?

Then the scenario changed. The drunks began to argue with each and then started getting up. I ordered them to get back on the ground, while still maintaining distance and covering the back rooms. Sure enough, out of one of the back rooms came a buddy of theirs with one hand out saying something to the effect of “it’s cool man, it’s cool”, with the other hand behind his back. I yelled at him to get on the ground when the hand behind his back started to move to present a gun. That’s when I “shot” him. End scenario.

Scenario based training is extremely valuable, and all of us learned something, no matter how well or how poorly we handled our given situation.

Overall this was a great day of training, and I think you will be hard pressed to find a better value for your training dollars. 2 Vets Arms really went out of their way going above and beyond expectations to provide this high value. For example, every student received a Dark Angel Medical D.A.R.K.Â (a $159 value) included in their tuition fee, even though this wasn’t advertised. 2VA also bought everyone lunch. I don’t know if this will be the case for future classes, but that should give you an idea of the type of people that run 2 Vets Arms.

Carbine Home Defense was a nice balance between the physical (movement, shooting) and the mental (critical thinking, problem solving). 2 Vets Arms is going to offer this classÂ againÂ (and others) in the near future – if you’re looking for training on how to better defend your home, I highly recommend checking out Carbine Home Defense.