You don’t see this every day.

This past weekend at a Fortress Defense Level II Pistol course, an interesting stoppage was observed. It happened with a 1911, and appeared to be caused by the exposed hammer of the 1911 catching a student’s garment on the draw stroke.

She drew her back-up and continued with her primary pistol dangling from her shirt. We almost had to beat the slide forward with a hammer to free it – the gun was out of action, completely seized up. You do this stuff long enough and you’ll see everything.

Check out the photos below, click for a larger version. 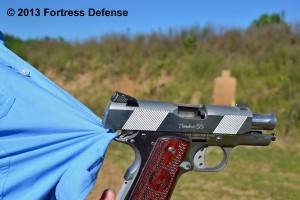 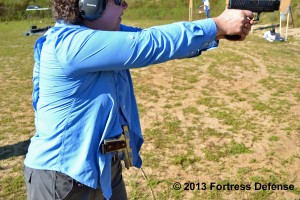 Kinda reinforces the idea of carrying a backup gun, doesn’t it?