Howard Shultz, the chairman, president and CEOÂ Starbucks Corporation, released an open letter today that discusses the company’s firearms policy. In short, Mr. Schultz is asking people to no longer bring firearms to Starbucks stores or outdoor seating areas. However, that doesn’t tell the entire story.

A lot of folks in the firearms community are upset about this letter, but I’m not, nor am I surprised really. My only surprise is that it has taken Mr. Shultz this long. To explain, let’s first examine how we got here.

Since at least 2010 (it may have been going on before 2010, but that’s when it hit my radar) gun control groups have been organizing various boycotts of Starbucks because of their corporate firearms policy. In response to these boycotts, the firearms community organized events like the Starbucks Appreciation DayÂ as a sort of counterbalance to the anti-gun crowd.

Starbucks’ stance on firearms was pretty simple: theyÂ wouldn’t implement any gun policies that added to or took away from Federal, State and local laws.Â In 2010, Schultz said the following to ABC News.

We woke up one day and all the sudden Starbucks was in the middle of this political crossfire between the people who want to bring a gun into Starbucks and the people who want to prevent it. It is a very difficult, fragile situation. We’re trying to abide by the law.Â Iâ€™m not a politician. I run a coffee company and weâ€™re trying to abide by the laws in which we do business.

It didn’t stop there, with escalation from both sides. On the pro-gun side, there have been all kinds of open carry demonstrations, some that went off without a hitch, some that were a little bumpy. On the anti-gun side, the boycotts have expanded, and politicians have gotten involved. 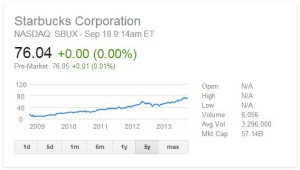 Now imagine that you are Mr. Shultz with a business to run, shareholders and a board to report to. Granted, Starbucks corporation has been doing quite well in recent years as is evidenced by their share price, but this escalating fight is quickly reaching a boiling point.

Starbucks became a stage prop for both sides of this argument, and it’s clear that they want no part of it. Be honest with yourself, can you blame them? No matter what they do, they are going to upset someone.

As I’ve said all along, I support open carry the same way I support concealed carry. I’m against any and all carry licensing programs. No, I shouldn’t have to take an exam created by a politician and pay an extortion fee in order exercise a God-given right.

In short, I’m for Constitutional Carry – the Second Amendment protects my right to carry a gun however I choose to carry it. If I owned a coffee shop, I would give a discount to anyone carrying a firearm, whether openly or concealed, and if I was Mr. Shultz, I would tell the anti-gun crowd to pound sand.

Having said that, please notice that I said “however” and not “wherever” with regards to carry. If we are truly going to support liberty, then we have to respect the rights of others, even if we don’t agree with them. A business should have the right to refuse service to individuals for any reason.

Where does this leave us?

The bottom line is that Starbucks isn’t refusing our business, and they aren’t banning open or concealed carry. They are trying to placate both sides of this argument, quietly back out of the spotlight, and theyÂ want the open carry demonstrations to stop.

They want to sell coffee.

Few topics in America generate a more polarized and emotional debate than guns. In recent months, Starbucks stores and our partners (employees) who work in our stores have been thrust unwillingly into the middle of this debate. Thatâ€™s why I am writing today with a respectful request that customers no longer bring firearms into our stores or outdoor seating areas.

From the beginning, our vision at Starbucks has been to create a â€œthird placeâ€ between home and work where people can come together to enjoy the peace and pleasure of coffee and community. Our values have always centered on building community rather than dividing people, and our stores exist to give every customer a safe and comfortable respite from the concerns of daily life.

We appreciate that there is a highly sensitive balance of rights and responsibilities surrounding Americaâ€™s gun laws, and we recognize the deep passion for and against the â€œopen carryâ€ laws adopted by many states. (In the United States, â€œopen carryâ€ is the term used for openly carrying a firearm in public.) For years we have listened carefully to input from our customers, partners, community leaders and voices on both sides of this complicated, highly charged issue.

Our companyâ€™s longstanding approach to â€œopen carryâ€ has been to follow local laws: we permit it in states where allowed and we prohibit it in states where these laws donâ€™t exist. We have chosen this approach because we believe our store partners should not be put in the uncomfortable position of requiring customers to disarm or leave our stores. We believe that gun policy should be addressed by government and law enforcementâ€”not by Starbucks and our store partners.

Recently, however, weâ€™ve seen the â€œopen carryâ€ debate become increasingly uncivil and, in some cases, even threatening. Pro-gun activists have used our stores as a political stage for media events misleadingly called â€œStarbucks Appreciation Daysâ€ that disingenuously portray Starbucks as a champion of â€œopen carry.â€ To be clear: we do not want these events in our stores. Some anti-gun activists have also played a role in ratcheting up the rhetoric and friction, including soliciting and confronting our customers and partners.

For these reasons, today we are respectfully requesting that customers no longer bring firearms into our stores or outdoor seating areasâ€”even in states where â€œopen carryâ€ is permittedâ€”unless they are authorized law enforcement personnel.

I would like to clarify two points. First, this is a request and not an outright ban. Why? Because we want to give responsible gun owners the chance to respect our requestâ€”and also because enforcing a ban would potentially require our partners to confront armed customers, and that is not a role I am comfortable asking Starbucks partners to take on. Second, we know we cannot satisfy everyone. For those who oppose â€œopen carry,â€ we believe the legislative and policy-making process is the proper arena for this debate, not our stores. For those who champion â€œopen carry,â€ please respect that Starbucks stores are places where everyone should feel relaxed and comfortable. The presence of a weapon in our stores is unsettling and upsetting for many of our customers.

I am proud of our country and our heritage of civil discourse and debate. It is in this spirit that we make todayâ€™s request. Whatever your view, I encourage you to be responsible and respectful of each other as citizens and neighbors.

28 Responses to Starbucks and Firearms