By Aaron Cowan on December 5, 2013 in Gear Reviews

Up until recently, I had not carried inside the waistband on a daily basis for years.Â  Because I have almost always worked in an environment where I carried outside the waistband for work, OWB translated to my daily life and I would adjust my attire accordingly to conceal my firearm.Â  On some occasions I would carry inside the waistband, usually when my attire didnâ€™t allow for concealing a hip carried handgun, but by and large I have spent a large majority of my gun carrying life using OWB holsters.

My reasoning for this was pretty simple; it is more efficient across multiple body positions to draw from the hip and for me, far faster to do so from an OWB holster.Â  Now, Iâ€™ve written on my personal holster preferences before, so I wonâ€™t go too far into the specifics of my preferred holster materials other than to say I prefer kydex for everything but IWB.Â Â  Leather is a living material, which makes it friendly to your skin but maybe not as long term durable as a synthetic material such as kydex.Â  Of course the durability factor is a relative issue because any quality holster is going to hold up fine until you replace it with â€œthe next best thingâ€ which we are all guilty of, and should be.

Just like every other manufactured product, holsters have improved thanks to more precise manufacturing techniques, innovations in design, better materials and market demand.Â  So as with all other frequently used products, we replace them when we can with the latest and greatest.Â  Only with holsters, we all know that what may look like the new, best solution isnâ€™t.Â  For me, this was the crux of my choice to carry OWB for so long, even when doing so required wardrobe adjustments I would have not made with an IWB holster.Â  I simply didnâ€™t find a single IWB holster comfortable.Â  There are a few that come close, but none that were the right blend of comfort and accessibility.Â  Donâ€™t get me wrong, a firearm is designed to be ergonomic for your hands, not your waistline.Â  There is going to be a degree of discomfort when carrying in any holster so I have always accepted the fact that I would get the occasional poke or pinch, itâ€™s just part of carrying. Â OWB carry negated a great deal of discomfort for me so I stuck with it perhaps as much as 95% of the time.

When the guys at Wild Bill’s Concealment contacted me to check out one of their holsters, I jumped at the chance because I was hoping for innovation.Â  To put things in perspective, Wild Bill’s Concealment has been in the holster making business for nearly thirty years.Â  That means that when Bill went into business, there was no internet.Â  There were print magazines, local retailers and word of mouth.Â  This was true for almost two decades of being in business.Â  They literally built their business the old fashioned way and still run it that way today.Â  When any company can pop up overnight and hit the ground running thanks to internet commerce, two things are going to ensure their success; customer service and quality.Â  WBC has both and it didn’t take me long to find that out. 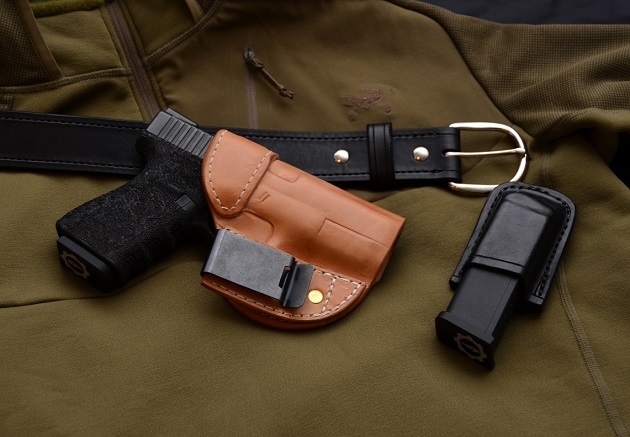 WBC sent me out their Covert Carry Package, which includes a Covert Carry holster, gun belt and single magazine pouch.Â  My first impression of the holster is that it felt like it had a kydex skeleton (it doesn’t).Â  It was stiff but pliable.Â  The belt felt the same way.Â  Only the magazine pouch seemed to have any â€œgiveâ€ to it.Â Â  I decided to give it a try immediately.Â  After putting everything on and running a few test draws to make sure the leather was not binding on my gun under the pressure of a tightened belt, I discovered two things I immediately liked about the Covert Carry holster: the offset belt clip allowed me to carry the gun further forward without the usual discomfort I get by wearing an IWB at the 7 or 8 position (4 or 5 for the right hand crowd) and despite sitting low in the belt line and being intended for concealment, the Covert CarryÂ holster did not pin the gun to my hip like it was stapled there.Â  It was also nice to discover that the belt clip has a split between it and the leather that allows you to tuck your shirt in.Â  I wear untucked for the most part, but having that feature worked into an IWB design that was not purpose built/marketed for the ability to carry with a tucked in shirt was pretty damn cool. 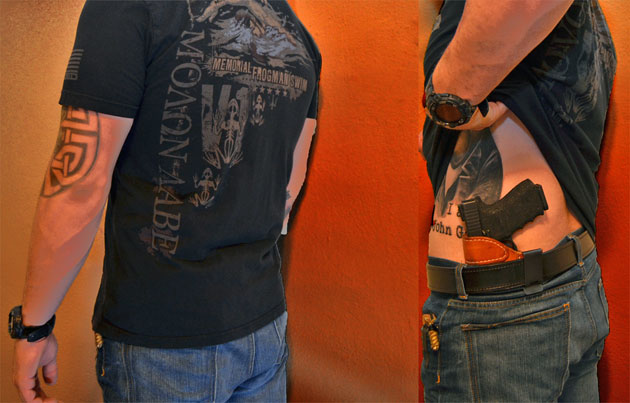 I still didn’t totally trust it, expecting a break-in period to be needed before the leather would loosen up; no such issues.Â  From day one the Covert CarryÂ holster (and magazine pouch) did not bind or offer undue resistance to the draw.Â  I took it to the range and worked it from every body position I could find myself in (kneeling, prone, supine, fetal, sitting, etc) without any holster binding whatsoever.Â Â  The draw felt natural, clearing my cover garment from the holster offered no resistance and the holster didn’t force the grip of my Glock in a direction that encouraged snags on light clothing like T-shirts (an issue Iâ€™I’ve had with other IWB holsters). 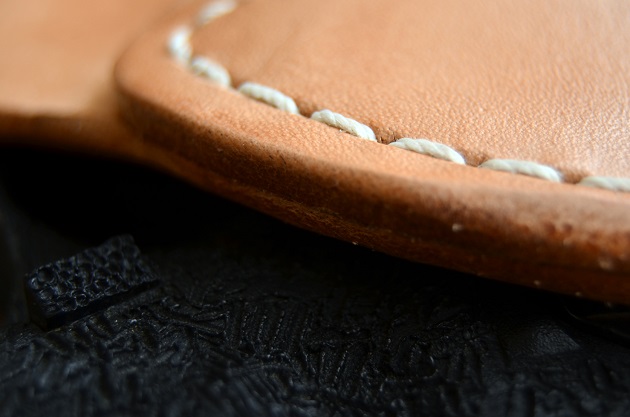 The Covert CarryÂ is stitched to hold the weapon securely while allowing for the pull and push of leather under the stresses of different body positions and belt tension.Â  I was also pleased to find that the sight channel in the Covert CarryÂ is generous, further helping to prevent any kind of snagging.Â  A holster is only as good as its performance from the worst possible draw position and I am willing to bet that Wild Bill’s Concealment has this in mind when designing, sewing and consistently producing excellent holsters with the customer in mind. 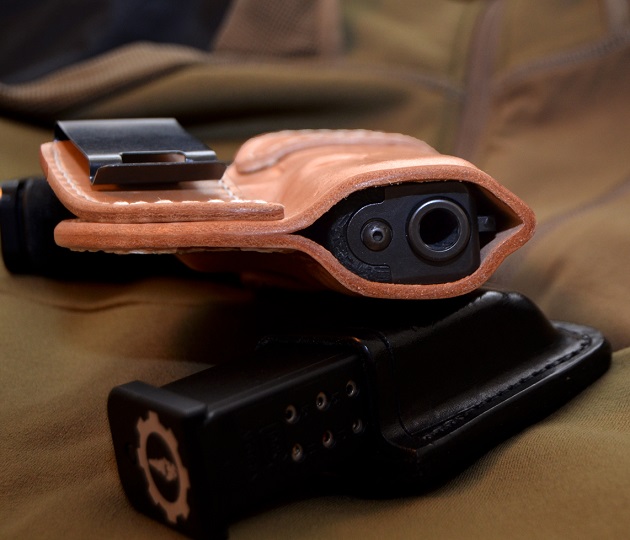 There has been a trend in holsters where the market moves towards the next best thing or next best material; today that material is kydex.Â  Kydex is a great material and it does offer some advantages over leather, but it is not a replacement for leather.Â  I personally do not care for the vast majority of kydex IWB holsters (my only exception out of those I have used is the kydex IWBs from Rodgers Custom Kydex Holsters) and will most likely always prefer leather for IWB.

My main reason is that, as already mentioned, leather is (or was) a living material, it molds and forms to the body and the weapon and provides just enough give to make wear more comfortable than the generally stiff kydex.Â  When it comes to concealment, especially IWB, we want a holster that holds the weapon close to the body, provides comfort and prevents binding on the gun by design.Â  The Covert Carry does all of those things for me in a package that is reliable and well made.Â  Adding in the craftsmanship of the WBC belt and magazine pouch, I have an IWB package that wont need replacement for years and doesn’t leave me wanting for the â€œnext best thing.â€Â  I consider that a pretty significant bonus in a holster purchase.

When I finally reach a point where I will be in the market for a new IWB holster, Iâ€™m going back to WBC for their quality, customer service and consistent products.