Editor’s Note: We hear a lot about the militarization of police these days, from rational evaluation of police purchases (does our local police department really need an armored vehicle?) toÂ full onÂ tinfoil hat psychosis and everything in between. While there’s no denying that America’s police are more and moreÂ adapting the “weapons and tactics of war,” the question remains: is it a good thing or a bad thing?

Personally, I’m against most of what is commonly referred to as police militarization, but I thought it would be interesting to view the topic from a police officer’s perspective, someone who puts his life on the line – literally – everyday Â to keep you and me safe. To that end, I asked Monderno contributor Robbie, a second generation police officer who is very pro-liberty, for his thoughts on the militarization of police.

To the vocal minority that almost always surfaces when law enforcement topics are discussed: in my experience, most police officers are good people doing a hard job for not a lot of money. The vast majority are not “jackboot thugs” or whatever pejoratives you’re using today. Are there bad cops? Absolutely. Just like there are bad doctors, priests, dentists, janitors, programmers, etc. I don’t like bad cops anymore than you do, but please try to keep the discussionÂ relevantÂ and the derogatory remarks to a minimum.Â

“Militarization of the police” is a term that has been around for quite a long time.Â  I consider it one of those trending phrases that the media likes to throw around from time to time in order to draw in viewers.Â  You only hear it when our law enforcement agencies adapt something from our military.Â  One of the first times I can recall hearing the phrase used was during the rise of the BDU style uniform in police work. Â Then it was the changeover from 12 gauge shotguns to patrol rifles, and now the term is showing back up again with more departments taking possession of military armored vehicles like the MRAP (Mine Resistant Ambush Protected Vehicle).

So is the militarization of police something that we as citizens should don our tinfoil hats and be concerned with? My answer to that question is both yes and no. 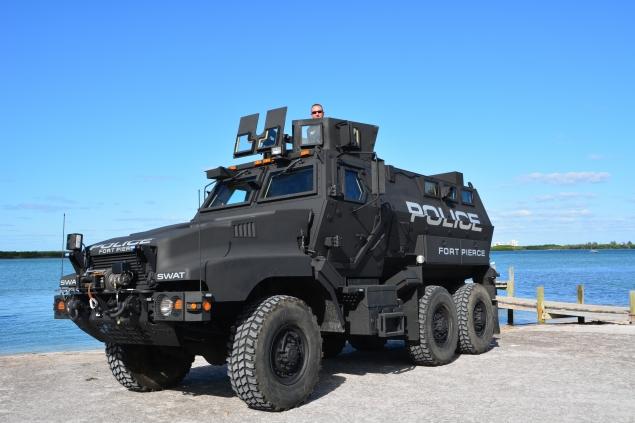 For the most part the changeover in police tactics comes from the best teacher of them all: experience. It usually goes down something like this – something bad happens, people die, and the questions start coming in wanting to know why the police couldn’t save the day.Â  We look for a way to prevent it from happening again and often the answer comes from the military in some way.

This has led to a change in our uniforms (for some departments), training, weapons, and even mindset.Â  All of these things I believe are for the better and allow officers to perform their jobs to a higher level than was previously possible.Â  Some will disagree and say that our police officers do not need any training or weapons that are even associated with the military.Â  My question to those folks is why not?Â  We have plenty of citizens who were trained in military tactics while they served and some are even making a nice income teaching these same tactics to citizens everyday. I have no problem with this.Â  If you want to spend your hard earned money to learn room clearing or vehicular assaults I 100% support you in that decision. Just like I 100% support the right of every citizen to own firearms such as the AR-15 or the AK-47 without the government telling you what features you can or cannot have on it, or how many rounds your magazine can hold. So why should it be an issue for our police officers to have access to the same weapons or training that just about any citizen of this country also has access to?

Where I Draw the Line

The area where I draw the line on what should be an acceptable level of militarization within our police departments is when we start obtaining equipment that is exclusive to the military and not available to the general public.

If the general public is prohibited from owning it, the police don’t need it either.

The MRAP that I mentioned above is one example of a piece of equipment that is exclusive to the military and as such I donâ€™t think our police departments should have them either. There are other reasons such as the high cost to operate and maintain them for very minimal use that makes me disagree with their use as well. If a department wants to purchase a light armored vehicle such as the Lenco BearCat I donâ€™t have a problem with it, as the general public does have access to light armored vehicles if you have enough money in the bank to purchase them.

Another area that I disagree with is a department obtaining heavy weapons such as the Browning M2.Â  Again, this is something not readily accessible to the general public and not really designed for law enforcement operations.Â  If a department believes that it has a need for a .50 caliber weapon there are plenty of options available through companies such as Barrett that any citizen can walk into a gun store and purchase.

Overall I donâ€™t think the militarization of our police departments is as out of hand as some would have you think it is.Â  I do believe that a department obtaining certain types of equipment from the military is crossing the line of whatâ€™s acceptable and should be addressed by the tax paying citizens of the towns where it is being obtained.Â  On the other hand some of the equipment and training that is being received from the military is useful and if utilized appropriately can save the towns and counties a lot of money.

As with anything in life I believe a little moderation and a lot of common sense goes a long way.