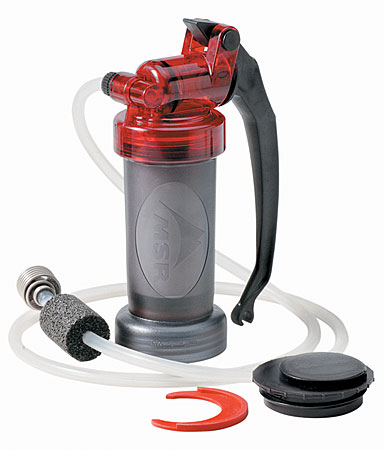 I live in the inner city and have always been an inner city kid.Â  I donâ€™t hike, hunt, or where cargo pants or camo unless Iâ€™m going through a door on the job.Â  So why was I assigned the task of testing the MSR filter?Â  We wanted to test the MSR MiniWorks EX and see how itÂ performs in an urban setting.

I know all the true preppers out there have land to escape to, shelters with food and water stored, and mountains of ammo.Â  For the rest of us, that level of preparation isnâ€™t always an option.Â  A good â€œbug out bagâ€ and an escape plan may be the next best thing.Â  When people start talking survival supplies and bug out necessities, guns, cool knives, and fancy ways to store food seem to always be the hot topics.Â  The truth is though, without water, you wonâ€™t live long enough to defend yourself with that tricked out AK-47, build a shelter with your survival knife, or eat those delicious cans of beans.Â  You can go weeks or even months without eating solid food.Â  Even Dexter Morgan can go longer than that without stabbing or shooting someone.Â  Our first priority is water.

The minimum amount of water that each of us needs will vary, depending on different factors, such as our weight, activity level, or the temperature outside.Â  I think itâ€™s a safe estimate that the average person probably canâ€™t go more than three to five days without water.Â  FEMA recommends that we store about one gallon of water a day for each person.Â  If you are bugging out to a safer location, gallons upon gallons of water may not be practical to carry with you, which means you may need to survive on water sources you can find along the way. These water sources are probably NOT going to be safe to drink without filtration or purification.Â  Enter the MSR MiniWorks EX.

The MSR MiniWorks EX filter is effective against chemicals, bacteria, toxins, and protozoa.Â  Iâ€™m no scientist and donâ€™t truly understand what half of those things are, but they sound bad and I donâ€™t want to drink them.Â  The MiniWorks EXÂ also has a long filter life with the ability to filter up to 2000 liters.Â  With a weight of roughly 16 ounces, itâ€™s much easier to lug around the MiniWorks EXÂ than 2000 liters of water.Â  Some have complained that the MSR MiniWorks EXÂ is heavy, but I feel itâ€™s a small price to pay for its ability.

Most of the MiniWorks EXâ€™s weight comes from the heavy ceramic filter element that it uses.Â  The plus side of using this ceramic element is the ability to easily clean it in the field.Â  You just disassemble the filter, which is very simple and requires no tools, and use the provided plastic scraper to clean off the element.Â  I did feel like I had to clean the filter more often than I would have liked.Â  Exactly how often a cleaning is required is going to depend on the type of water you are filtering.Â  I found that if you take a coffee filter and use it as a â€œpre-filterâ€, the element stays clean much longer.Â  Some may say this is cheating, but I feel itâ€™s pretty easy to throw some coffee filters in a zip-lock bag and rubber band it to the filter body so they are always nearby.Â  The coffee filter will block all the larger debris inside the water so there arenâ€™t large chunks of nastiness hitting the ceramic element. 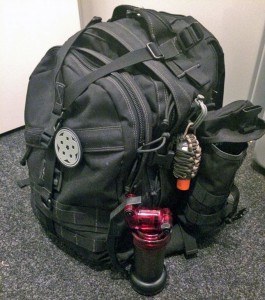 I tested the MSR filter on water found in large puddles, old rainwater collected in buckets, etc, since there are no streams or rivers in the “urban jungle.” Â I tried to stick with possible water sources one might run across in a large city.Â  Surprisingly I found that the MiniWorks EX was pretty effective at improving the taste of dirty water.Â  It wasn’t magic by any means.Â  I didn’t lap up puddles thinking it tasted like VOSS water (I bet Colin Noir drinks VOSS), but it was easily palatable, and more importantly, I didn’t get sick. Â As a bonus, this filter was pretty effective at removing the taste of chlorine and iodine.Â  So if you choose to treat your water with either of these methods to kill viruses, you can run it through the MiniWorks EXÂ and eliminate the aftertaste that comes with these purification methods.

All in all, I found that the MSR MiniWorks EXÂ filter works as advertised.Â  I would not hesitate to recommend this filter to anyone looking for a portable water filtration system or anyone that just was not ready to invest in a larger filtration system.Â  The weight of the MiniWorks EXÂ is manageable and it really doesn’t take up much more space than a Nalgene bottle.Â  Carrying this filter around is a very small price to pay for the ability to filter and clean almost any water you come across into something you can drink.