There are a lot of criticisms about the AR-15/M4 platform of weapons.Â  Some say the .223/5.56 round is for weenies.Â  Others claim the direct impingement gas system is dirty and results in reliability problems.Â  Regardless of the level of validity in these complaints, it cannot be argued that the AR-15 rifle is one of the most common weapon systems used by law enforcement and military today.

An AR-15 built by a reputable manufacturer should operate reliably and shoot accurately with minimal upkeep.Â  Armed with an AR-15 style weapon in several different law enforcement roles, I have never felt a strong urge to switch to a different platform of rifle.Â  My eyes only wandered briefly to the FN SCAR, and the only reason that happened was because the SCAR had a folding stock.

Due to the design of the buffer tube in the AR-15 pattern rifle, the gun has always been limited to either a fixed stock or a collapsible stock.Â  Many shooters have had to resort to disassembling the rifle into upper and lower in order to facilitate discreet transportation.Â  A broken down AR-15 can fit in to a much smaller package, but it slows deployment considerably since you would have to reassemble the two halves of the firearm before being able to fire it.Â  Law Tactical may have provided some of us with a decent solution to this problem with the Law Tactical Folding Stock Adapter. 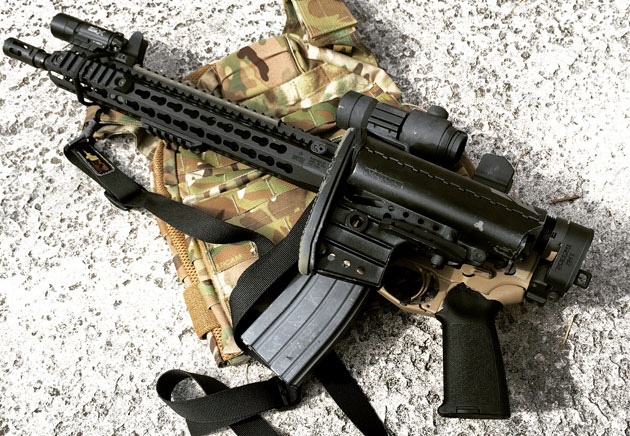 The adapter comes with an included Quick-Detach sling swivel mount at the base of the adapter. 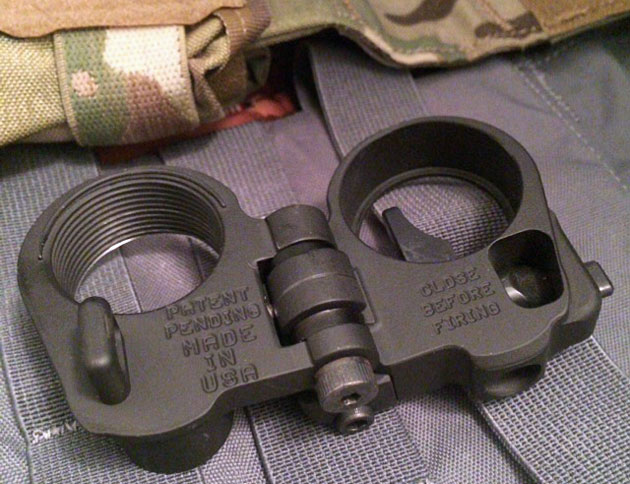 The adapter is made of CNC machined 4140 tool steel and along with the bolt carrier extension, adds over 10.5 oz of weight to the rifle.Â  I canâ€™t say the weight went unnoticed, but it also was not a deal breaker.Â  The rifle still felt balanced and handled well due to the extra weight being added just above the firing hand grip.Â  The fit and finish of the adapter appeared flawless with a very even black Cerakote finish.Â  The most notable thing I felt when I first shouldered my rifle with the Law adapter installed was the 1.3â€ of length the adapter adds to the rifle.

I took the rifle with the newly installed folding adapter out to an indoor range.Â  I shot the rifle out to 100 yards and did not notice any shift in zero.Â  I had zero malfunctions after 300 rounds, using Magpul, Lancer, and standard GI magazines.Â  I shot a mix of Wolf, Monarch, Hornady, and Winchester ammunition and did not have problems with any of them.

Next I took the rifle outdoors to put it through a faster rate of fire as well as some dynamic drills.Â  While running the rifle without body armor, the adapter was not really an issue.Â  I normally run my stock extended by one notch, but collapsed it down to its shortest setting to offset the 1.3â€ added by the adapter.Â  The rifle handled well and the weight of the adapter was noticeable but did not hinder the balance of the rifle.Â  So far so good. When I put on my plate carrier, the extra length from the adapter presented a minor issue.Â  I was still able to shoot and operate the rifle but I was forced to hold it further out than I prefer.Â  Running the rifle in full kit, I was forced to move my Surefire light pressure switch and my vertical fore grip back an inch or two.Â  I am a small guy though, so I imagine this may not be much of an issue with most shooters.

The hinge on the adapter sticks out a bit on the left side of the gun.Â  If you are a right handed shooter and use your left hand to work the charging handle, running your open hand back along the side of the gun will not work because the hinge will obstruct the movement of your palm. 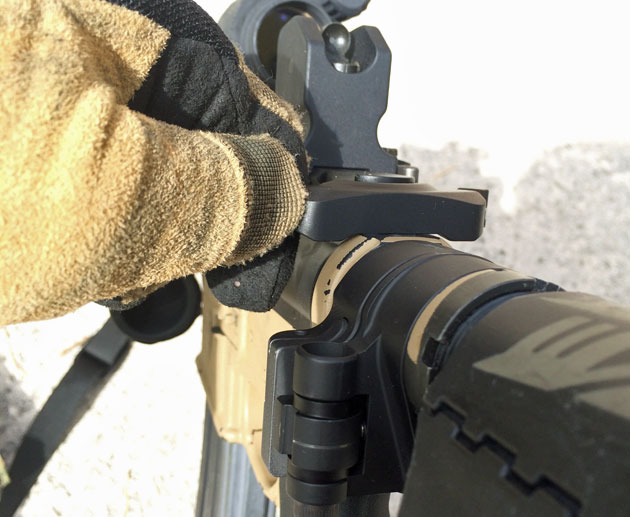 I tend to pinch the left side of the charging handle with my thumb and forefinger though and the hinge did not bother me at all.

Other than the added weight, added length, and slight hinge protrusion, the rifle handled just like you would expect an AR-15 style weapon to handle.Â  The stock feels solid and locks in place confidently when deployed.Â  Pressing a button on the right side of the rifle allows you to fold the stock to the left.Â  With a 16â€ barrel you still wonâ€™t be fitting your gun in a small backpack, but a duffel bag or gym back would be easy.Â  Using the folding adapter on a short barrel rifle or AR pistol would allow you to fit your weapon in all sorts of confined spaces.

The question a lot of people ask when they hear about the LAW Adapter is, â€œCan it fire with the stock folded?â€Â  The answer is yes…sort of.Â  Attempting to shoot a rifle equipped with the LAW Gen 3 Adapter with the stock folded will result in one round firing.Â  Since the bolt carrier group will not contact the buffer tube, it will induce a malfunction after the first round.Â  Firing with the stock closed also puts a great deal of stress on the lower receiver and is not recommended by the manufacturer.Â  I only attempted this twice on my own rifle.Â  It successfully fired both times, but each time I had to clear a malfunction before I was able to fire any follow up rounds.

The LAW Generation 3 Folding Stock Adapter appears to be a reliable option for those that have an AR style rifle but need the ability to collapse the weapon down.Â  Transporting and storing a rifle with a folding stock is preferable to taking the upper and lower apart.Â  A LAW adapter allows you to carry your rifle in a discreet bag, or tucked inside your vehicle, with the ability to quickly deploy it by simply pulling the rifle out and swinging the stock in to its open position.

The adapter does not appear to affect rifle zero or reliability when used properly.Â  More long term testing will have to be done to find out the longevity of the o-rings used on the bolt carrier extension, but with proper maintenance I feel confident that the rifle will continue running smoothly.

Overall I am very happy with my LAW Folding Stock Adapter and will leave it on my rifle.Â  I will probably try to replace my Vltor stock with something shorter though to since the extra length added by the adapter is not ideal for me when wearing hard armor. If youâ€™d like the ability to fold your AR down and do not have short tyrannosaurus arms, then the LAW Folding Stock Adapter may be for you.