In today’s world of mass shootings and terrorist attacks, an increasing number of people are looking to be prepared for such an event. Weapons and training should play a central role in that preparation, but so should gear. As threats have evolved so has the approach to being prepared – enter the plate carrier. Plates are one of those things that you really don’t need…until you do. Good rigs also give you options for attaching various pouches so your gear and ammo is where you need it, when you need it – on your person.

Police and Military personnel have worn body armor for years, and the reason for this is simple, it saves lives. I personally have a buddy that took a couple of AK rounds to the chest, and were it not for his ESAPIs, he probably wouldn’t have survived. 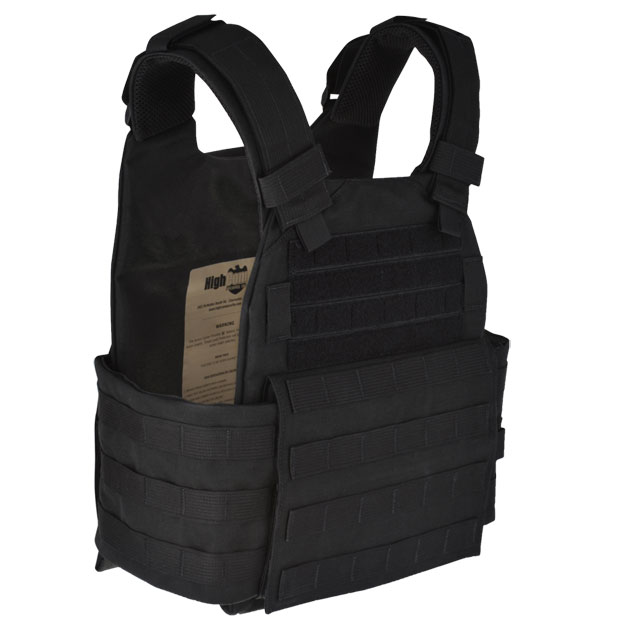 Having worn plate carriers for years I can say that they are not all created equal, and I was favorably impressed with the rig I’ve been playing with from HighCom Security. The first thing I do when trying out a new rig is to wear it: while working out, running, at the range, and on the job. I had the chance to run this system for several months and found it to be very rugged with absolutely no durability issues.

The main things I look for in a plate carrier are quality, functionality, and comfort. It has to be designed well, able to stand up to the rigors of daily hard use, not overly bulky, and fit well enough to wear for hours on end. The Trooper ACAP boasts many of the features you would see on a good plate carrier: MOLLE, drag handle, some Velcro front and back, and holds a set of plates securely. In addition, there were a few features that set it apart. 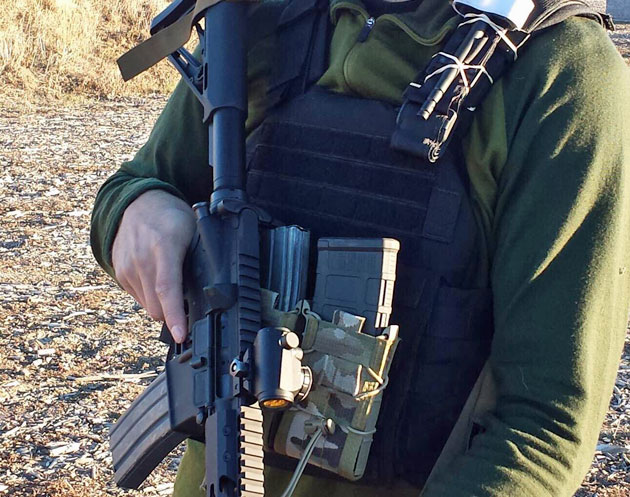 There is plenty of MOLLE to attach whatever your heart desires and the top several inches is also Velcro covered for all of your cool guy patches. The vest is proportioned well and it didn’t restrict my mobility at all.

HighCom states that this carrier was designed for quick deployment situations, but I also found it to be very comfortable, even during the course of a 12 hour shift. There are several design features that I attribute to this.

First, the vest was designed with an overlapping cummerbund with a double overlap closure; this allowed it to be adjusted and snugged up comfortably. If a vest doesn’t fit well and flaps around while moving, it’s going to get replaced.

I like to wear my plates as high as possible. This gets the vest off my belt, keeps it from restricting my mobility, and most importantly, positions the plates directly over my vital organs.

The shoulder straps were easily adjustable to position the plates correctly and the movable pads eased the shoulder strain. The pads are also removable if you don’t like the bulk. One of my pet peeves is having big bulky shoulder straps on plate carriers. They make it very difficult to get the buttstock into your shoulder or to get a consistent cheek weld. However, even with these pads in place I didn’t experience any issues running a carbine. 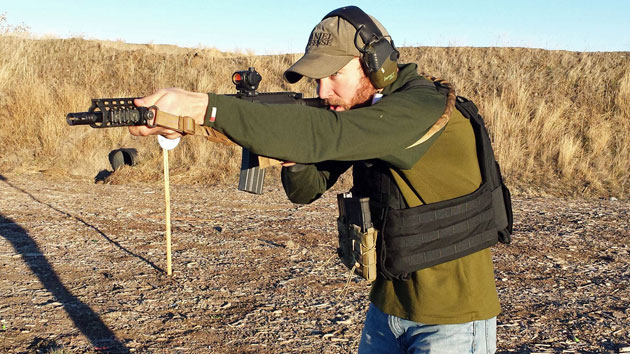 Another feature that I appreciated from a comfort standpoint was that HighCom lined the area between the plates and your body with a thin layer of foam. This really kept the edges of the plates from digging in, which is particularly nice if you spend much time riding in vehicles. While the overlapping system and the foam insert did add some bulk to the vest, I would still consider it low profile, and it isn’t too obtrusive when worn under a loose fitting jacket.

There are a myriad of plate carriers out there. Some may have more options, some may be a bit lighter, but for an across the board option that is built well, wears very comfortably and is priced right, the Trooper ACAP is a solid performer. Grab a couple plates, slap on a mag pouch or two, add your patches, rubber band on a tourniquet, and you’ll have some serious peace of mind should the bullets ever start flying.

Seth is an accomplished shooter with an extensive competition and instructing background, an Afghanistan combat veteran, and the lead instructor for the Montana Shooting Institute. Seth is an avid student of the gun and the combat mindset. As an instructor he is dedicated to increasing the knowledge, skill, and survivability for shooters in all walks of life. Seth spent several years in the prestigious Army Marksmanship Unit as an international and service pistol team member, and a primary instructor for their Instructor Training Group. He has trained combat forces from a dozen countries, various US Army units, Special Operations Forces, SWAT, and US Marshall Service personnel. Seth's shooting accomplishments include being a member of the Olympic Development Team, several NRA Collegiate Pistol National titles, 25m rapid fire pistol finalist at the 2012 Olympic team trials, and US Army sniper school honor graduate. Seth is currently is a sworn police officer and a state legislator. He is also an avid outdoorsman and is usually roaming the mountains when not training.
View all posts by Seth →

Cluelessness, Cowardice, and Complicity
Get to cover? A requiem for common sense.