Smart guns have hit the shelves in California, and as many have pointed out, they are in fact anything but “smart.”Â

First, let’s make sure we’re all on the same page. What constitutes a smart gun? If you’re thinking Skyfall, then you’re on the right track. Simply put, a smart gun is one that won’t fire without first electronically verifying the owner. The means of electronic verification vary with design, but the concept remains the same. 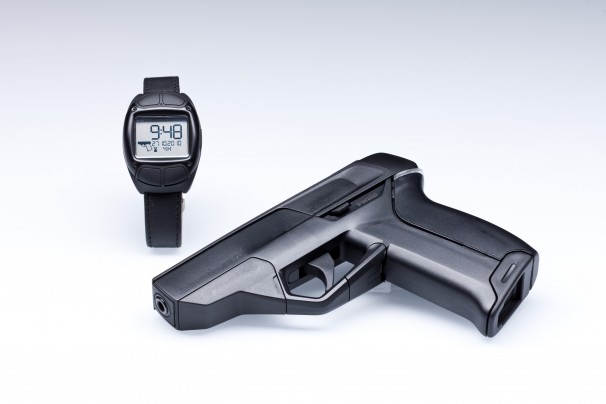 TheÂ Armatix iP1 is a .22 LR caliber pistol with a 10 round magazine. Why is there a watch in the photo above you might ask? Because the gun won’t fire without it. The watch has a built-inÂ RFID chip that acts as the gun’s safety. If the watch comes within close proximity to the gun, about 10 inches, the gun will unlock, displaying a green light on the grip letting the user know that it can be fired. Armatix calls this their Smart System.

Smart System consists of a radio-controlled watch that is responsible for gun access and use. A Smart System gun will only shoot if it is within range of this watch. It is possible to release the safety mechanism via the radiocontrolled watch activated by means of a PIN code. As soon as the gun loses radio contact with the watch â€“ e.g. if it is knocked out of the shooterâ€™s hand or in case of loss, theft, etc. â€“ it automatically deactivates itself.

If you’re in the “this is a good thing” camp, keep reading.

The Problems Are Many

I’m going to leave the ridiculous price tag alone in this discussion – I won’t even mention that you can buy three brand new Glocks and a bunch of spare mags for $1,800 – because it’s a new technology (well, more accurately, it’s a new implementation of an established technology) and the price will likely come down with time. Instead, let’s examine the practical problems with smart guns.

First off, the obvious – for all intents and purposes, you have to be wearing the watch in order to fire the gun, meaning that it’s almost completely worthless as a self-defense weapon. What if the electronics in the watch or pistol become damaged? What if someone else needs to use your gun in an emergency? What if the batteries go dead when you need the gun the most? What happens if the gun/watch RFID is hacked? What if someone creates an RFID dead zone/jamming device? I could go on…

The real issue here, though, isn’t about how dumb “smart” guns are, nor is it how impractical they are in the real world. Just don’t buy one, right? If the politicians get their way, you won’t have a choice.

The real problem – smart guns will lead to gun control and registration.

There’s a political push for smart guns, and despite all of the talk of “saving the children,” this push has nothing to do with safety and everything to do with control. Don’t think so?

Lawmakers around the country have been intrigued by the possibilities. New Jersey passed a hotly contested law in 2002 requiring that only smart guns be sold in the state within three years of a smart gun being sold anywhere in the country. A similar measure made it through the California Senate last year, and at the federal level,Â Rep. John F. TierneyÂ (D-Mass.) also has introduced a mandate.

Gun control advocates (politicians in particular) love the idea of smart guns, and the question you should ask yourself is “why?” The answer is that smart guns open up all kinds of new possibilities to restrict people’s right to keep and bear arms. If people are forced to purchase smart guns, like in the case of New Jersey, that will mean fewer guns on the market, fewer people will have access to them, and the technology will absolutely lead to registration, whether we are told about it or not.

Think about this for a second – RFID can easily be tracked, not to mention that who knows what’s actually going on inside the watch/gun. Do you really think it’s much of a stretch to say that not only will the government know the who/what/when/where of the smart guns on the market, but that they won’t have a way of turning them all off? If you think my tinfoil hat is fitted too tightly, maybe you need to come back to reality.

“Smart” guns are a lot like “affordable” healthcare – anything but. NotÂ only are they a really bad idea, but if we allow the politicians to force them on us, the consequences could be dire indeed.

11 Responses to Smart Guns Are Here