Those of you who have been following Monderno for a while know that I have a bit of a thing for the PHLster Skeleton holster. To date it remains one of my favorite minimalist appendix carry holsters, and I’ve recommended it to quite a few of you. Recently, the mad scientists over at PHLster came up with something new based on the Skeleton that they are calling the ACCESS. I’ve been beating on it for a while now and I’m now ready to tell you all about it.

The ACCESS is a slightly-more-than-minimalist (I may have made that term up) inside the waistband (IWB) holster made out of Kydex, that uses a single G-Code clip as the belt attachment mechanism (more on the clip in a bit). The ACCESS can best be described as the big brother to the Skeleton, with a clip instead of a soft loop. I run my ACCESS in the appendix-ish position (slightly more towards center than the appendix), but this holster is equally at home in other IWB positions if that is your preference. The Skeleton holster, which the ACCESS is based on, uses a soft loop as the belt attachment mechanism. If I’m honest, I have a bit of a love/hate relationship with soft loops. Soft loops are commonly used by holster makers because they work and they’re extremely durable (the love part), but they can be annoying to put on and take off, especially when directional snaps are used (and there’s the hate). So it’s a bit of a conundrum – do you use what works but is more than slightly annoying to a lot of people?

The obvious answer for holster makers is to make a Kydex clip, instead of a soft loop,Â to go along with the Kydex holster. The problem, however, is that Kydex clips almost universally suck and don’t withstand much use and abuse (though there are a few good ones out there).

Enter the G-Code injection molded clip, which so far has been the best of both worlds. This little fella is much more durable than I expected, and through quite a bit of use and some moderate abuse remains unaffected. The short version is that I am very impressed. With the G-Code clip, the ACCESS is easy to put on and easy to take off, and I don’t have to worry about the clip breaking at the worst possible time. Well done G-Code, great choice PHLster.

If you’re familiar with PHLster, then you already know the quality of the ACCESS holster – it’s top shelf. LikeÂ Gran Patron Burdeos top shelf. There are a lot of Kydex shops out there, and a lot of them do great work. Of these, there are handful that I would place at the top as far as quality goes, and PHLster is one of them. You can expect super smooth edges and maniacal attention to detail when you order from PHLster.

Retention is definitely on the hot side as far as Kydex goes – much stiffer retention than the Shield. This took a bit of getting used to for me as I prefer a little less retention for IWB carry, but it hasn’t affected me using the holster. You will, however, need to use a purpose driven gun belt that is stiff enough to handle the retention of the ACCESS. 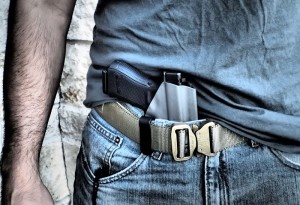 The PHLster ACCESS carries really well. The G-CODE clip is angled away from the holster, which helps turn your pistol into your body, thereby reducing printing. The ride height is what I would call medium, but can be adjusted slightly if you prefer higher or lower. Since it has a single attachment point, you can adjust the cant slightly forward or backward depending on your preference, though on my body it tends to return toÂ neutral. I find the ACCESS to be just as comfortable as the Skeleton.

The PHLster ACCESS is an excellent IWB holster. At the time of writing it is only being offered in black, the gray color you see pictured was a special first run only color. Not quite secretÂ squirrel, but it allows me to pretend.

Color options aside, if you’re looking for a Kydex holster and you like the idea of a clip, this is a really good place to start. Typical PHLster quality and a nice design, all for around $60. That’s really tough to beat.