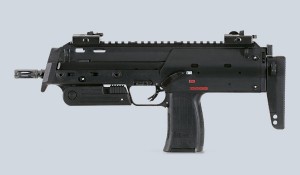 In RECOIL Magazine‘s latest issue, issue #4, RECOIL features theÂ HK MP7A1, a Personal Defense Weapon (PDW) made by the Heckler & Koch (HK). The MP7A1 is smaller than a conventionalÂ submachine gun with rifle capabilities firing the HK developedÂ 4.6 x 30mm round which is capable of defeating most conventionally used body armor.

Well in typical HK fashion, the MP7A1 will not be sold to civilians, which should not surprise anyone familiar with HK’s history. What might surprise you, however, is that RECOIL Magazine editorÂ Jerry Tsai agrees with HK. In his MP7A1 write-up, he had this to say.
[blockquote cite=”Jerry Tsai, Editor, RECOIL Magazine Issue #4″]Like we mentioned before, the MP7A1 is unavailable to civilians and for good reason. We all know thatâ€™s technology no civvies should ever get to lay their hands on. This is a purpose-built weapon with no sporting applications to speak of. It is made to put down scumbags, and thatâ€™s it. Mike Cabrera of Heckler & Koch Law Enforcement Sales and veteran law enforcement officer with SWAT unit experience points out that this is a gun that you do not want in the wrong, slimy hands. It comes with semi-automatic and full-auto firing modes only. Its overall size places it between a handgun and submachine gun. Its assault rifle capabilities and small size make this a serious weapon that should not be taken lightly.[/blockquote]

There’s so much wrong with the above nonsense, I’m tempted to dissect each and every ridiculous thing he said. In the interest of brevity however, I will instead focus only on the mostÂ grievousÂ of mendacities, Tsai’s statements about “sporting applications.” Pay attention Jerry, you might learn something.

[blockquote cite=”Second Amendment, United States Constitution”]A well regulated Militia, being necessary to the security of a free State, the right of the people to keep and bear Arms, shall not be infringed.[/blockquote]

The Second Amendment, for those who do not know, has nothing to do with sporting applications, to use Tsai’s ignorant Brady Campaign phrase. The Second Amendment doesn’t protect our right to hunt, and it’s not about concealed carry as most believe. It’s really not even about home defense.

[framed_box]The Second Amendment is about protecting our ability, our right, and our duty to oppose tyranny.[/framed_box]

[blockquote cite=”The Declaration of Independence”]But when a long train of abuses and usurpations, pursuing invariably the same Object evinces a design to reduce them under absolute Despotism, it is their right, it is their duty, to throw off such Government…[/blockquote]

You see, our founding fathers knew something about tyranny. They knew that in order to prevent and potentially oppose tyranny, the people must be sufficiently armed in the same manner as the organized militia (the military).Â That’s why keeping and bearing arms is the Second Amendment to the Constitution, second only to our First Amendment right to freely speak out against the government.

If HK wants to sell theÂ MP7A1 to military and law enforcement only, so be it. I don’t agree with that decision of course, but they can do whatever they want. I do, however, have a major problem with RECOIL Magazine selling out its readers and pandering to the gun control advocates with their “sporting applications” ignorance, and I for one am never buying another copy of RECOIL.

United States v. MillerÂ established that the Second Amendment protects an individual’s right to possess weapons that are used for the preservation or efficiency of a well regulated militia.

McDonald v. ChicagoÂ held that the Second Amendment applies to the individual states.

Once the fallout started on the RECOIL Facebook Fan Page, RECOIL Editor Jerry TsaiÂ responded in a pitiful attempt at damage control. I have included his response from their Facebook page unaltered in its entirety below in case you want to read it. He does not retract his statement, he does not apologize, instead, he tries to justify his ownÂ ignorance.

At the time of writing, advertisers like Silencerco have already started pulling out from RECOIL. Here’s hoping more follow.

Update 9/14/2012: Jerry Tsai has resigned as Editor of RECOIL Magazine.

[blockquote]Hey guys, this is Jerry Tsai, Editor of RECOIL. I think I need to jump in here and clarify what I wrote in the MP7A1 article. It looks like I may not have stated my point clearly enough in that line that is quoted up above. Let’s be clear, neither RECOIL nor I are taking the stance on what should or should not be made available on the commercial market although I can see how what was written can be confused as such.

Because we don’t want anything to be taken out of context, let’s complete that quote and read the entire paragraph:

“Like we mentioned before, the MP7A1 is unavailable to civilians and for good reason. We all know thatâ€™s technology no civvies should ever get to lay their hands on. This is a purpose-built weapon with no sporting applications to speak of. It is made to put down scumbags, and thatâ€™s it. Mike Cabrera of Heckler & Koch Law Enforcement Sales and veteran law enforcement officer with SWAT unit experience points out that this is a gun that you do not want in the wrong, slimy hands. It comes with semi-automatic and full-auto firing modes only. Its overall size places it between a handgun and submachine gun. Its assault rifle capabilities and small size make this a serious weapon that should not be taken lightly.”

Let’ also review why this gun should not be taken lightly. In the article it was stated that the MP7A1 is a slightly larger than handgun sized machine-gun that can be accurately fired and penetrate Soviet style body armor at more than 300 yards. In the wrong hands, that’s a bad day for the good guys.

As readers of RECOIL, we all agree that we love bad-ass hardware, there’s no question about that. I believe that in a perfect world, all of us should have access to every kind of gadget that we desire. Believe me, being a civvie myself, I’d love to be able to get my hands on an MP7A1 of my own regardless of its stated purpose, but unfortunately the reality is that it isn’t available to us. As a fellow enthusiast, I know how frustrating it is to want something only to be denied it.

Its manufacturer has not made the gun available to the general public and when we asked if it would ever come to the commercial market, they replied that it is strictly a military and law enforcement weapon, adding that there are no sporting applications for it. Is it wrong that HK decided against selling a full-auto pocket sized machine gun that can penetrate armor from hundreds of yards away? It’s their decision to make and their decision they have to live with not mine nor anybody else’s.

I accepted their answer for what it was out of respect for those serving in uniform. I believe that we as gun enthusiasts should respect our brothers in law enforcement, agency work and the military and also keep them out of harms way. Like HK, I wouldn’t want to see one of these slip into the wrong hands either. Whether or not you agree with this is fine. I am compelled to explain a point that I was trying to make that may have not been clear.

Thanks for reading,
– JT, Editor, RECOIL[/blockquote]

88 Responses to RECOIL Magazine and the Second Amendment