Controversy and gun handling techniques go hand in hand.Â  Any time there is a new technique introduced or an unorthodox technique gets widespread exposure (no matter how long it has been in use), there will be all manner of instructors, shooters and spectators chiming in on the usefulness or stupidity of the technique.Â  Recently, the technique that has found itself in the cross hairs is the technique that has been popularly referred to as â€œtemple index.â€Â As with any controversy, context is often ignored and speculation is based on third party explanations, personal opinions or photographs without details.Â  Perhaps the worst culprit of all when it comes to these industry-driven debates and arguments is the rattling of the range mentality mindset and how it hurts far more than it helps.Â  None more so than in the case of a real-world applicable technique that is demonized or dismissed because it somehow doesnâ€™t apply to this-or-that training methodology as it is viewed through the lens of use on the range. 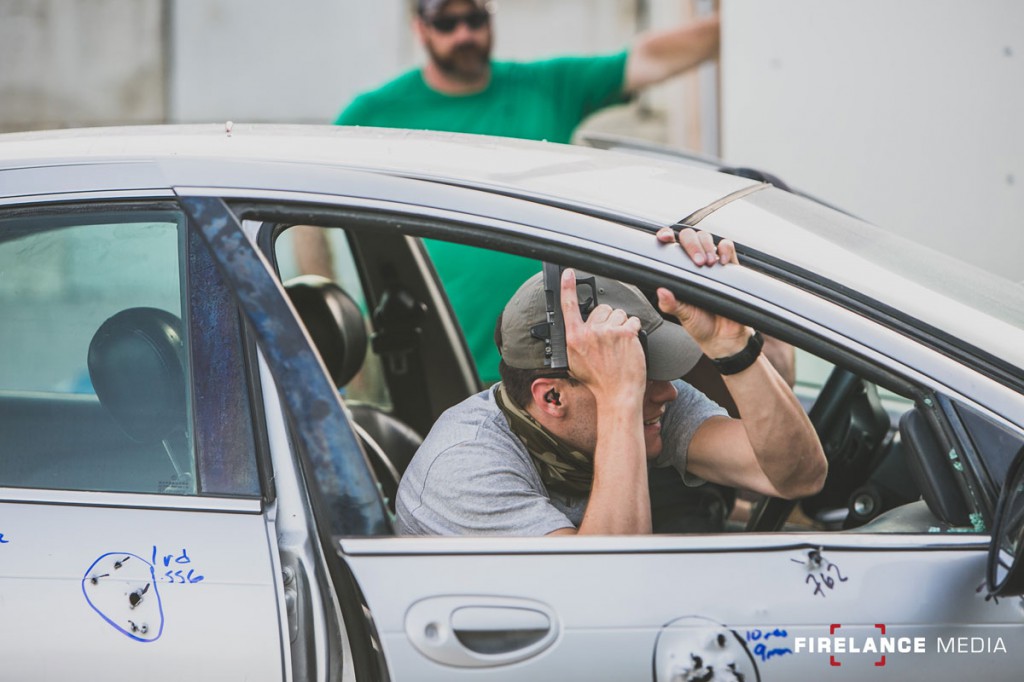 The history of the Temple Index position is a long and storied one; though its exposure to the contemporary training world is recent. Â Â When I first learned it, the technique was introduced to me as High Vertical Ready and it was for use maneuvering inside a vehicle for Personal Security Detail purposes.Â  It was used to safely pivot in a seat without muzzling other passengers to engage a threat inside or outside of the cabin.Â  As anyone who has worked PSD knows, sometimes there are possible threats inside the vehicle with your client and everyone outside the car is a possible threat.Â  Being able to maneuver in a seat with weapon drawn, be it with your family, fellow officers, soldiers, detail members or general passengers is tricky business with few physical techniques. 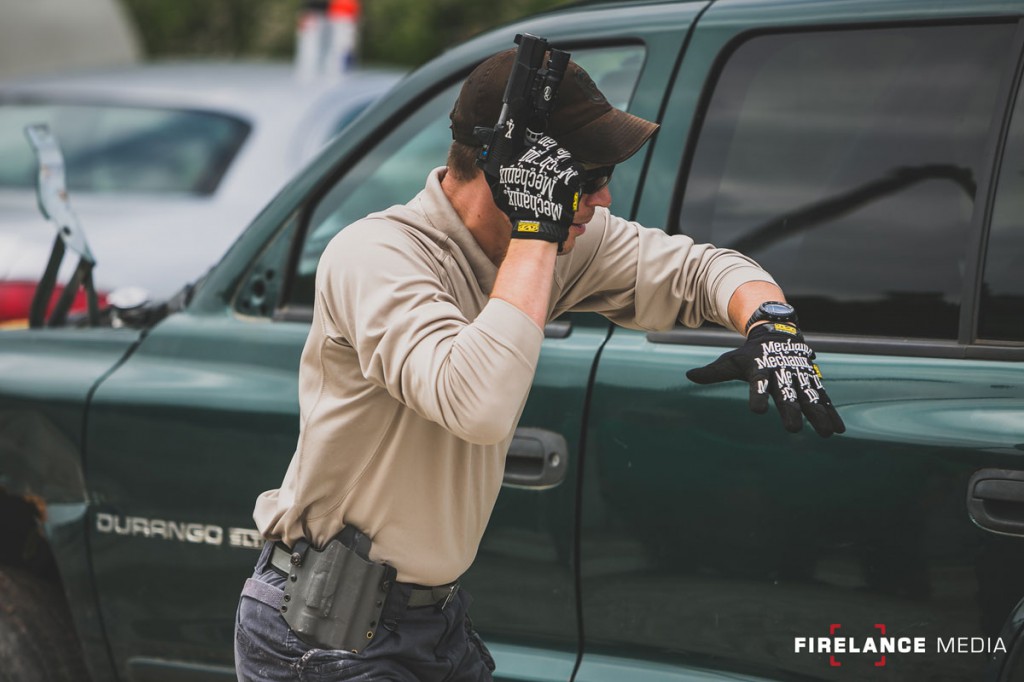 The next time I saw it, it was called High Ready and it was explained as a safe method to avoid muzzling unknowns as you exit a vehicle, especially in crowded areas and explained as a method to use as/if you move to the rear of the vehicle to access rear storage to bring more guns to the fight or to make your way to hard cover.Â  Anyone who has ever sucked into a car or even an SUV body knows that moving in a crouch leaves little safe places to point your weapon if the horizontal isnâ€™t an option.

My last training encounter with Temple Index was in regards to the rifle; it was called High Port and it was taught by a Naval Special Warfare veteran as a method to maneuver the weapon (in this case, a rifle) through deep snow/brush and to navigate tight spaces or move quickly when running with a barrel-down would lead to a lot of barrel/leg contact.Â  Running with a long arm, especially as part of a team, leaves few ways to carry your rifle without muzzling others and the navigation of tight quarters or less-than-ideal terrain a problem with few solutions. Â Crowding into a hallway, or tunnel and needing to get your rifle into the fight from muzzle up is much easier than muzzle down for obvious reasons. 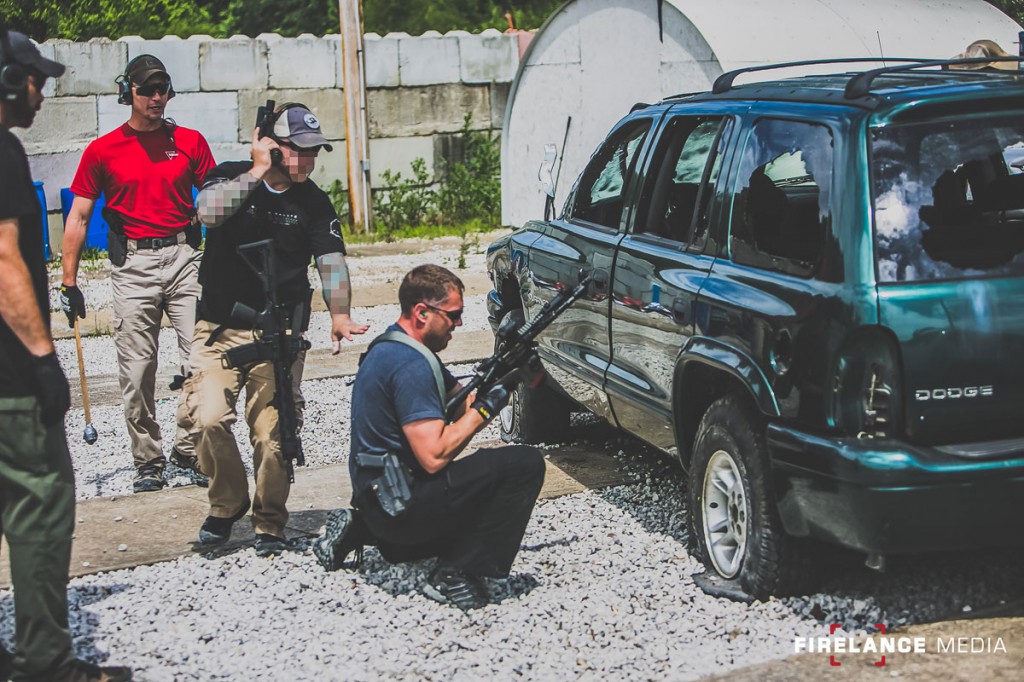 With any technique, context is very important.Â  If a technique is taken out of context, or defended by someone who doesnâ€™t have a full appreciation of the context, it only makes matters worse.Â  However, the most damaging aspect of any debate regarding any applicable technique is range mentality.Â  Ranges are neat places with ideal footing, convenient targets, clean lines and most angles in the 90 degree family.Â  Few are urban streets, cramped huts, parking lots, construction sites, wadis or escarpments.Â  Ranges usually have all the bullets going in one direction and everyone is fairly certain that anything needing shot will be in that direction.Â  We know the range and the range is a safe place so long as safety is observed.Â Â

Up is usually a frowned upon direction to point oneâ€™s weapon because of gravity.Â  On the range we always have a safe direction to point our weapon and that is either down range or down at the ground.Â  Well, the range is not the real world and the real world doesnâ€™t have a down range.Â  Itâ€™s also worth mentioning that pointing your weapon down in the real world may also not be an option because there may be people under you, you will muzzle yourself as you run, crouch-walk, or in the case of a single wide trailer used as a meth lab; explosions because meth labs generally do not react well to gun fire and through the roof is better than into the milk crate containing who knows what.

When I train students, be they citizen or LE, safety is taught in regards to the real world.Â  If there is a safest place to point a weapon when not in use, thatâ€™s where it should be pointed.Â Â  This is the paramount safety rule of self-defense focused instruction; known safe direction over unknown safe direction.Â  What do I mean?Â  If I am exiting a vehicle and there are store fronts, pedestrians, occupied vehicles or residential homes in my arc, the weapon should not be pointed that way.Â  Up, or Temple Index is the safest known direction that also allows crouched movement, running or exiting of the vehicle with the handgun already drawn (especially for right handed shooters).

In regards to a rifle, what methods are there to exit and not muzzle the horizontal?Â  With all due respect to some instructors speaking out against Temple Index, High Port, High Vertical Ready or whatever the nom de guerre is, the weapon must be pointed in the safest known direction and that is usually up in such circumstances.Â  Can there be a negligent discharge?Â  Absolutely there can and if there is, we know that the fired round has the potential to injure someone as it returns to earth.Â  Is this more or less of a risk than having a negligent discharge as the rifle/pistol is leveled at a home, a playground, a line of cars at a red light or a store front?Â  I know there are people in the latter, so the former is the safest direction to point the weapon in that circumstance. Â How fast can you run in a SUL position without muzzling yourself?Â  Better yet, where do you point your muzzle when you do run?Â  Â Letâ€™s not ignore the existence of other safety rules such as trigger finger discipline because in this case all it does is highlight an instructors subjective disdain or disagreement with a technique based on range mentality and/or lack of experience/instruction with a valid technique.

If Iâ€™m working through a crowd of screaming kids and/or adults fleeing a shooter, where is my weapon?Â  Up, or down where any physical contact can keep it from the fight?Â  Is there a right answer to that question?Â  I would say not one right answer, but a wrong answer would be any answer that assumes the range and a real life shooting play by the same rules. 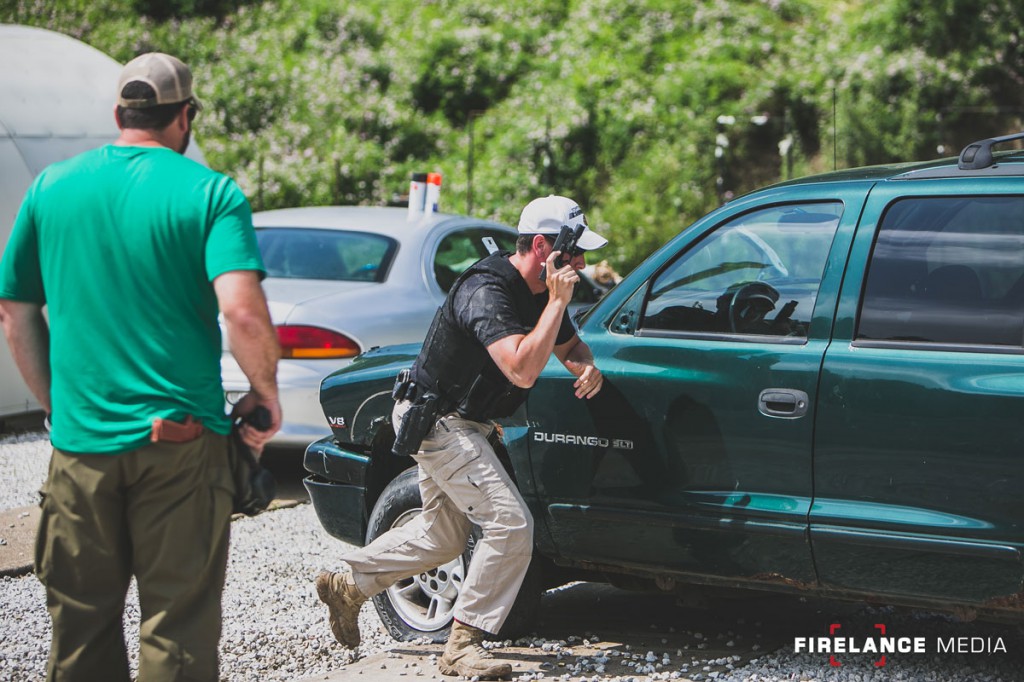 I really cannot say that enough.Â  This is not the newest SUL position, and even SUL is seriously overused or incorrectly applied by shooters from all backgrounds.Â  Temple Index is for very specific circumstances and stands alone as one of many tools.Â  Weapons do not exist on wires or operate inside of imaginary limit boxes.Â  They can and should be pointed in a safe direction any time they are not needed to gain compliance or incapacitation of a threat.Â  That safest direction is dictated by where you are forced to fight, not by some unbreakable rule that demands range-like compliance in the real world.

There are many quality instructors teaching Temple Index, and they are teaching it in context.Â  William Petty, a Texas LEO and trainer (and the man who coined the term Temple Index and was/is the source of much â€œcontroversyâ€ for teaching it) Steve Fisher of Sentinel Concepts, Chris Costa of Costa Ludus, Jeff Gonzalez of Trident Concepts, and myself of Sage Dynamics are just a few trainers teaching this technique in the context in which it belongs.

Itâ€™s a valid technique, and despite much fuss itâ€™s here to stay, particularly since itâ€™s been in use by some accounts since the early 70â€™s, has survived countless real-world uses without failing to prove its usefulness and has only recently gained widespread attention thanks to the internet. Â Â There is nothing unsafe about Temple Index by its necessity, only by using it out of context when other options would prove safer based on the situation.Â  If those other options donâ€™t exist or are not as prudent, Temple Index, when performed correctly, allows the shooter to maintain full awareness and move as safe as the situation will allow until the muzzle can be redirected.

So the controversy aside, I do hope this helps put things in a different light for some, or at least give context to those shooters/instructors that were not sure of or who were speaking out against the technique without having it properly explained.Â Â  Itâ€™s a tool, and itâ€™s a tool you would be foolish to ignore if you want to use the â€œreal-world trainingâ€ shingle on your door.

45 Responses to The Temple Index – Real World vs the Range