In the market of boutique, limited and full-production rifles, Black Rain is newer than many.Â  Usually newer means you have to prove your quality and customer service to a customer base that goes from just-getting-started to I check headspacing between rounds.Â  Proving yourself is important, because rifles need to last, be reliable and meet the customerâ€™s needs even if those needs change over the course of owning the rifle.Â

As with all things, there is a hierarchy of quality and with AR platform rifles, this hierarchy is hotly contested amongst more experienced or at least more particular shooters and there are only a few talking points that can be agreed upon.Â  Some brands are recognized by mention as being of irrefutable quality, while others can either be the best thing ever or not depending on who you talk to.Â  With opinions, availability and cost ceilings driving the market, there is always going to be a push for new designs, innovation and improvement just as there is going to be suspicion over any of those things being put out by a newer company. 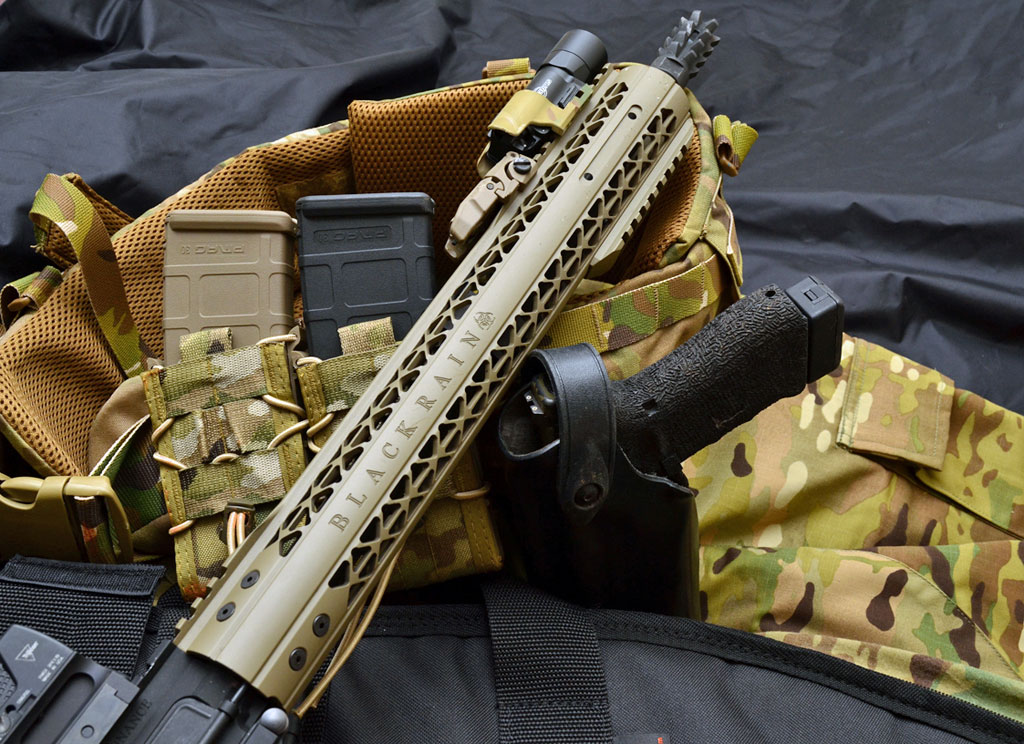 Because a quality firearm isnâ€™t cheap, those in the market turn to reviews for information before making a purchase.Â  The more in-depth a review, the better so when I received a Black Rain Fallout 15 for review, my goal was to run it hard but to keep it realistic.Â  As always, the rifle was pre-treated with lubricant; in this case Snake Oil Prime from All Star Tactical, before the test began.Â  Some might want to see a rifle run without lubricant though my opinion is that any rifle that will run hard without lubrication probably has tolerances so loose that its accuracy will be dismal.

My testing goals were simple.Â  2000 rounds as fast as possible with no cleaning; general spec testing and rifle accuracy.Â  While I could have drug it behind my truck or thrown it from a bridge, I donâ€™t feel like these tests best reflect what the average shooter will encounter and the functional reliability of the rifle is a far more important topic to focus on.Â  So I did just that.

The rifle in hand had Black Rainâ€™s 3.5 LBs single stage trigger installed, Magpul MBUS sights, modular rail and a B5 Systems SOPMOD stock (which I installed as I prefer it over the supplied Magpul CTR).Â  Standard features are the familiar AR fair except for a user-adjustable low-profile gas block, NIB-X bolt carrier group and an enlarged charging handle latch.Â  While I was tempted to tune the gas system to my preferred â€œsweet spotâ€ I decided to run the entire test on the factory setting; I was not disappointed in that decision. 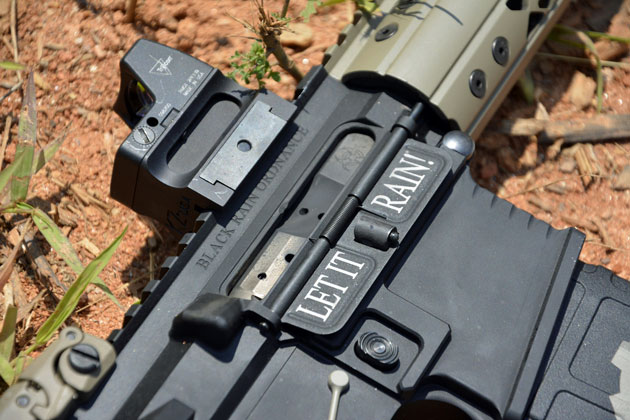 The very first thing you notice firing a Black Rain rifle is the trigger; smooth, crisp pull, a noticeable but light wall and a clean break with no perceptible trigger wobble.Â  The reset is short and forceful.Â  Because the trigger is exact on tolerances, it lets you run the gun very, very fast if you wishâ€¦and I did.Â  While slow and methodical fire has its place, being able to put as many rounds out as possible may save your life (or at the very least make bad guys rethink career choices) so a quick trigger is always a must for me.Â  How fast is it?Â  For me I clocked splits in the .15-.18 range regularly and managed more than a few .13â€™s.Â  The average shooter would have little trouble putting out a 30 round magazine in under 5 seconds and be able to do so accurately because the Black Rainâ€™s recoil pulse is almost obnoxiously flat.Â  How flat?Â  Well recoil control is as much the shooters job as it is the rifle, and many other things come into play such as barrel brake/flash hider/compensator, shooting position and grip used.Â  That being said, I was able to control the rifle pushing the wall of my fastest trigger times with little effort.

The perceptible muzzle rise was minimal and soft enough that pressing the gun back to my desired point of impact was more intuitive than conscious effort.Â  Shooting paper I could drive a full magazine of head shots from 15-35 meters in 4 to 6 seconds.Â  On steel, a 10×10 plate could be serviced from as far out as 50 meters with a full magazine in well under 10.Â  When talking distance, it seemed almost like cheating to hit a 10×10 plate in the kneeling at 300 meters with 5 rounds in under 10 seconds.Â  The barrel is chambered in 223 Wylde, double fluted stainless with 1×8 rifling; user skills apply but this configuration makes accuracy a constant when all the fundamentals come together. 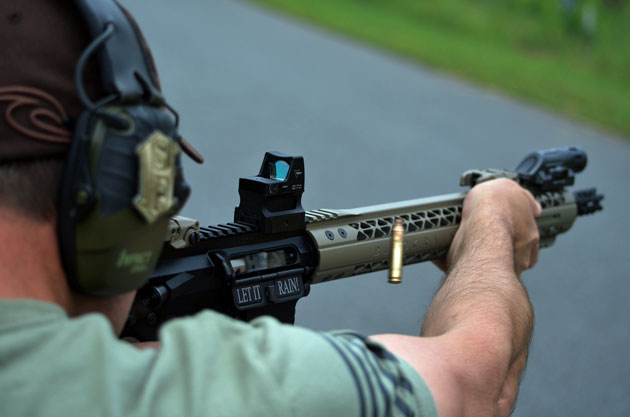 So how hard do you push a rifle?Â  Well when testing the â€œspecâ€ of a rifle I use as many different magazines as possible and try to induce malfunctions through different shooting positions and by forcing the rifle to make contact with the environment.Â  For this test I used Gen1-3 Magpul PMAGs, Surefire 60 round magazines, Brownells, C Products, HK (steel), Troy polymer, and a few Gen 1 USGI Okay products magazines (black follower).Â  I liberally used each magazine as a monopod when in the prone, braced the rifle on all manners of barriers and ran the gun hot enough to get the rail temperature up to 250+ degrees.

Through the first 1100 rounds of wolf I patiently waited for a malfunction that didnâ€™t come.Â  I had a handful of ammunition malfunctions, but not a single malfunction that could be attributed to gun or magazine.Â  Reloads were always smooth and all controls functioned precisely.Â  Drop testing during cool down periods did nothing to change the performance or affect tolerances.Â  When I hit the 1500 round mark I gave the Black Rain two hours submerged in pond water.Â  With the amount of carbon built up in the rifle after 1500 rounds, the introduction of water was sure to gum things up.Â  It didnâ€™t.Â  From the pond (allowing excess water to drain) the rifle fired from first to last round.

Changes in ammunition did nothing to affect the performance into the 1600 round neighborhood, Speer Gold Dot fed reliably and the groups were sub-MOA.Â  Let me say that again; at 1600 rounds the Black Rain was still shooting sub-MOA.Â  I did not see my first malfunction until I broke 1700 rounds.Â  Between 1700 and 2000 Rounds the Rifle experienced 3 double feeds; twice on C Products aluminum magazines (Magpul followers) and once on an Okay Industries aluminum (black follower) magazine.Â  Each malfunction cleared quickly and without further issues.Â  The cause was excessive carbon build up around the extractor.Â  A problem I corrected by simply rutting out the area with my finger; total fix time, about 10 seconds.

The last 200 rounds of the test I focused strictly on accuracy, the rifle continued to group consistently for precision and practical accuracy.Â  My initial zero was a 50/200 meter zero, I allowed the rifle to cool to ambient temperature and then fired 3 5-round groups at 50 meters from the prone (allowing for cool down time between).Â  Pictured below is the worst of those three groups.Â  Then I got the gun hot; pushing the barrel up to the modest 170 degree (f) range and fired an additional 3 5-round groups. Â Pictured is the worst of those groups. 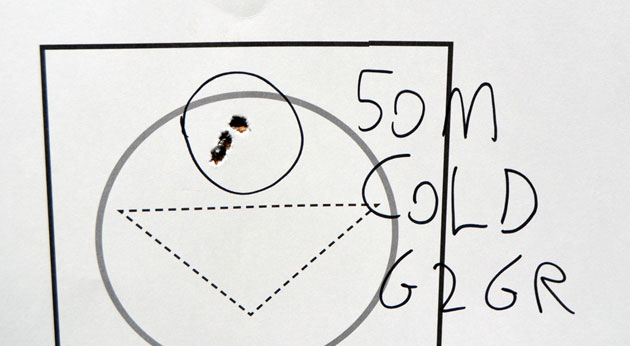 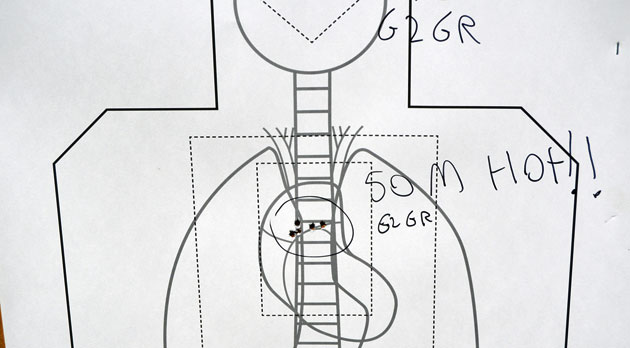 At the end of a 2000 round test I donâ€™t have much negative to say about this rifle other than the fact that I donâ€™t care for the supplied rail.Â  It offers little space for attachments and almost forces the shooter to use a single-point sling.Â  While this is a minor furniture issue, it does become an issue when rail temps break the 150 degree range and there is no method of attaching rail covers.Â  This rail is best suited for 3-gun I think, though for patrol or home defense use of a different Black Rain rail would be preferable.

My final impression is that The Black Rain rifle is worth the money.Â  Sure, they are more expensive than your â€œaverageâ€ AR.Â  They are more expensive because they are not an â€œaverageâ€ AR manufacturer.Â  Nearly all of Black Rains parts are made in-house in their Kenosha, WI shop; Billet uppers, Lowers, rail, charging handle, triggers, brakes, compensators, and bolt carrier groups.Â  The soul of the rifle is all made in-house and this assures a quality control, fit and consistency that few other manufacturers can match.Â  If you want a rifle that will last and maintain a high degree of reliability from first to last round, Black Rain should be at the top of your list.

Iraqi Christian Refugee Relief Mission
The Spread of the Caliphate