Over a year ago and after serious consideration, I finally decided to put together a course I had been thinking of.Â  At that point, I had been an active shooter response instructor for law enforcement/military for some time and was well into using a Single Officer Response to an Active Shooter program I had designed to address the overwhelming reality of active shooter events.Â  The simple fact is that there often is no time for an officer to wait for two, three or four additional officers to confront an active shooter; an officer should move to confront the shooter as soon as possible to prevent further loss of life.

It was during the design of the Single Officer program that I came across repeated truths in my research; well over half of all active shooters are stopped by citizen, not police.Â  This didn’t amaze me, because I know from teaching the quality of motivated citizens and how strong their resolve can be when it comes to defending life.Â  But the fact did make me wonder; if over half of active shooters are stopped by a CCW or even an unarmed citizen, how many more might have been stopped if an everyday man or woman had received training on responding to and confronting an active shooter?

I had no way of answering that then and I still donâ€™t because there is simply no way to know.Â  But I know that training breeds confidence, provides mental and physical tools and it gives a person more options than they would have without it.Â  It became not so much a question of if I should put together a citizen class, but how to go about it.Â  So I made some calls.

I wouldn’t do that.

Do you think thatâ€™s a good idea?

I’m not sure you should be teaching that to civilians.

I had talked to a handful of trainers in law enforcement and many of them were not on board with the idea and every one of them had the same reason – liability.Â  â€œWhat if one of your students decides to shoot up a school?Â  You would have trained them in response tactics.â€

They had a point, albeit a very dull one.Â  It was possible and I did put some thought into the implications but it became another question I had no way of answering and one that is ridiculous to me based on its premise; if instructors were so worried about what one of their students might do with their training, none of them would be teaching everyday citizens.Â  Beyond the moral steps we take to ensure our students are safe and legal to train, there was no reason why I could not, should not train a responsible citizen who wanted the training.Â  I also dismissed the idea of providing any sort of â€œlaw enforcement sensitiveâ€ information because departments have been more than willing to film their training and put it on YouTube for some time now (something I totally disagree with).

So I began building the course.Â  What did it need to be?Â  How should it be run?Â  What should I not teach?Â  This wasnâ€™t a question of if I should teach a â€œcivilianâ€ explosive breaching or a five finger death punch, it was about life saving skills that I know they have every right to.Â  When I thought about it like that, the list of techniques I couldnâ€™t teach them became small, very small.Â  The fact is, law enforcement gets trained on how to respond to an active shooter but it is non-LEO citizens going about their daily lives that are suddenly the targets of unspeakable violence.Â  They have every right to defend themselves and the lives of others if they choose to and clearly the governmentâ€™s advice consisted of cowering in place and as a last resort using some sort of force to defend yourself (the Run Hide Fight plan) that wasnâ€™t helping anyone.Â  So the course focus was easy; history, realism and fundamental techniques. 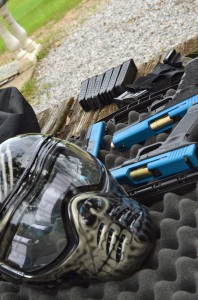 To maximize realism, the class would be based on force-on-force scenarios, purpose-built to reflect real life; waiting rooms, schools, office buildings and public gatherings.Â  The sad history of violence against citizens is well known; from the 1986 Edmond, Oklahoma shooting where Pat Sherrill killed 14 co-workers and then himself (coining the phrase â€œgoing postalâ€) to the 2012 Newtown, Connecticut shooting in which Adam Lanza murdered 26 at Sandy Hook Elementary school, active shooters have shown a preference for seeking out and attacking soft targets where law enforcement presence is likely to be low and the chances of an armed citizen is rare, especially in so-called â€œgun free zones.â€

On top of that, the traditional self-defense skills had to be purpose driven to confront an active shooter in an environment that is likely to be chaotic, confusing and certainly filled with innocent bystanders. Â Students also had to be prepared for the eventual law enforcement response as well and how to take active steps to positively identify themselves as one of the good guys and comply with the standard law enforcement treatment.

Teaching someone how to predict an active shooter is very difficult.Â  We simply cannot know another personâ€™s intentions.Â  At any given time, we only have a best-educated-guess as to what someone is going to do before they do it.Â  There are signs of impending violence, â€œpre-assaultâ€ indicators but they often rely on one-on-one interaction or extended observation.Â  Those who can reflect on an active shooter as they were before an attack can often see some signs that is was going to happen, that something was going to happen but their after-the-fact knowledge is only useful in an academic sense, but totally useless to a man suddenly shielding his children as a merciless shooter opens fire on a crowd.

To the armed citizen, these attacks will almost always be spontaneous; no time to take a comfortable shooting stance, no time for a press check, no time to check magazines; they must constantly be prepared and be able to recognize the attack for what it is; a crime against humanity, not a crime of profit such as robbery or even targeted murder.Â Â  The best and only way to prepare any who would come to me for this training was with a class built on stress inoculation. 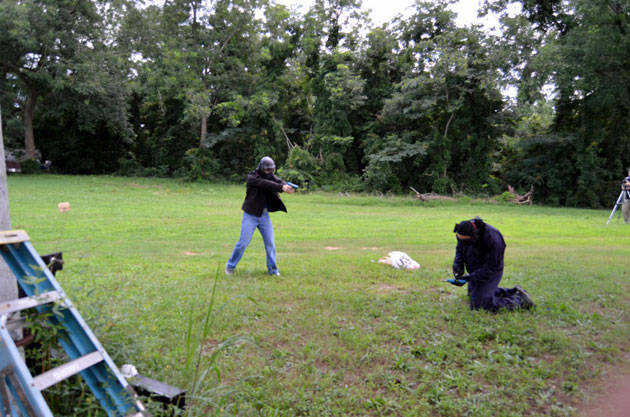 The wisest way to physically prepare for self-defense and the defense of others is to train in an environment that mimics reality as closely as possible.Â  The wisest way to mentally prepare is to do the same.Â  As a training model, force-on-force is becoming more and more popular because it eliminates many of the â€œsquare rangeâ€ training artificialities of live fire training and it physically reinforces good techniques and identifies bad ones.

This popularity is also a result of more and more training systems such as Simunitions being made available for citizen instruction instead of being restricted for law enforcement and military only.Â  With this sort of training available, it only made sense to use it to its full potential, teaching the same people who may be targets of a mass killing using a system that makes it as real as possible.

When I began putting together the physical techniques for the course, I had a serious concern; the very environment that a shooting was likely to occur in.Â  Positive threat identification and being aware of what may be beyond the threat meant that students were going to need to be trained in three dimensions and force scenarios that pushed their fire discipline to the absolute limit while still being grounded in a non-static reality.Â  I spent a lot of time building each scenario to be fluid, adjustable and generic enough that students couldn’t game it.

Then there was the common sense instruction, navigating doorways, hallways, basic room clearing, basic emergency medicine, recognizing the difference between an active shooter and a hostage situation and prudent approaches to a threat who is armed with superior firepower.

Those are SWAT tactics.

A fellow instructor and LEO lamented when I showed him the course guide in-progress.Â  As much as I love my SWAT/SRT/SORT/ERT brothers and sisters, I disagree.Â  They are life saving techniques that any responsible gun owner has a right to know.Â  If it can save lives, no one has the right to deny you the knowledge and anyone who disagrees should seriously question their motivation for doing so.Â  Are there boogie men?Â  Of course, and more often than not they come from the fringes society, not the life blood of second amendment citizens.

At the end of the day, I had some peers uncomfortable with the idea of teaching what they considered to be offensive tactics; I disagreedâ€¦they are defensive tactics, used to defend lives in extremis in the fatal minutes between a shooting beginning and the law enforcement response.Â  There is no crystal ball that can predict how long that response will be and every second that goes by is another live potentially lost.Â  I am much more comfortable with the idea of a responsible citizen choosing to stop the violence before police respond than ineffectively loitering under a desk because thatâ€™s what the government and some in law enforcement want him or her to do.Â  There is no way to cease an attack through strict defense, action is required and fast.

So it took over a year to prepare the course and a great deal of that time was focused on creating maximum realism for a reasonable cost to the student.Â  To give the best skills without overloading the student with too much at one time and of course, providing the best mental focus training I could.Â  I know that this course wonâ€™t be popular with some in law enforcement, perhaps some in the media.Â  I donâ€™t particularly care. I’ve been a civilian, soldier and a cop. That doesn’t make me unique, but I think it does help me see things just a little differently:Â  the responsible gun owner and the officer are on the same team.Â  Both face different dangers in their day to day lives but when it comes to a person attempting to kill as many people as they can, often it’s only the officer who has been trained to confront that person and often they are not there as it happens.

You have a natural right to protect yourself and a right to choose to protect others.Â  I stand by this belief and will train all responsible citizens wanting to be trained.Â  Can this class make a difference?Â  I hope so, though I would rather not have to find out.Â  Because the hearts and minds of evil remain unpredictable, we must train and be prepared to stop them.Â  All of us.

Editor’s note: If you would like to sign up for the latest Sage Dynamics Armed Shooter Citizen Response class, you can check it out on Facebook and at SageDynamics.org. I wish I lived closer to Georgia, I would love to attend.